Number of newborn babies still on the decline

Number of newborn babies still on the decline 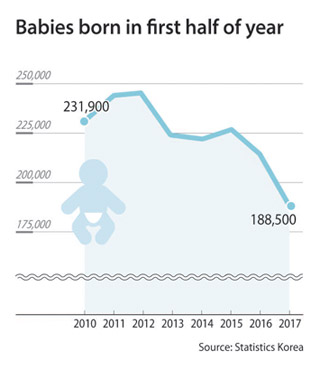 For the first time since 1970, the number babies born in the first six months of a year fell below the 200,000 mark, another sign that the aging of Korea is picking up pace.

The number of babies born in June - 28,900 - is the lowest monthly number since statistics were kept in current form starting in 1970.

If the slump continues through the second half of the year, the number of babies born in 2017 is expected to fall short of 400,000 for the first time since 1970.

“Our forecast estimates that the country’s population will start declining in 2032,” said Lee Ji-yeon, director of the population forecast bureau at Statistics Korea. “But if the birth rates do not pick up, we now believe the population decline could come as soon as 2024.”

The Korean government has invested over 100 trillion won ($88.7 billion) over the past decade in a futile attempt to elevate birth rates.

In 2016, the average birth rate, or the number of babies born per woman, stood at 1.17, the lowest ever. But that record is likely to be broken again this year. Should the trend continue into the second half of the year, the average birthrate for 2017 could be as low as 1.04.

“A decrease in the number of marriages by women in their early 30s is having a huge impact on birthrate,” said Lee of Statistics Korea.

With an accelerating decline in the number of births, the country is about to face four so-called negative demographic events: the number of babies born per year falling below 400,000; a shrinking working population; the number of senior adults surpassing that of children; and the entry into an aged society, in which people aged 65 and older comprise 7 percent or more of a total population.

President Moon Jae-in said at a press conference on Sunday that the key to turning the situation around was in creating an environment in which “working parents could raise children” with a balance between work and child rearing. But most of Korea’s failed efforts in the past have been in that direction.

Shin Jee-hee, 32, is one of countless working mothers who decided not to have a second child. “Though my husband, a government worker, and I both work, I don’t know how I could pay the mortgage and education costs [if I have another child],” said Shin, the mother of a three-year-old daughter. “I think it is only feasible to have only one child under such circumstances.”

The Moon government is offering 100,000 won per month in aid to parents who have children under the age of five starting from July 2018.

In a series of measures meant to address the low birthrate problem, the welfare ministry said Thursday that women who had given birth or had miscarriages in the past 60 days would benefit from universal national health insurance with all their medical expenses covered starting next month.

But experts say a more fundamental approach to changing Korea’s social structure is required to raise the fertility rate.

“Expanding welfare benefits such as day care aid and ensuring paid-maternity leave for fathers and expanding the scope of paid leave are not enough to fully address this low birthrate problem,” said Kim Sang-ho, head of the Korea Institute for Health and Social Affairs.

“The government needs to carry out policies that directly deal with housing, youth employment and educational issues, which are the direct causes of low birthrates.”

“In the short term, the government needs what can be perceived as shock therapy, like giving 50 to 70 million won in childbirth support funds for each baby born.”