Political expression goes from streets to galleries : Anti-government protests have given artists space to create

Political expression goes from streets to galleries : Anti-government protests have given artists space to create 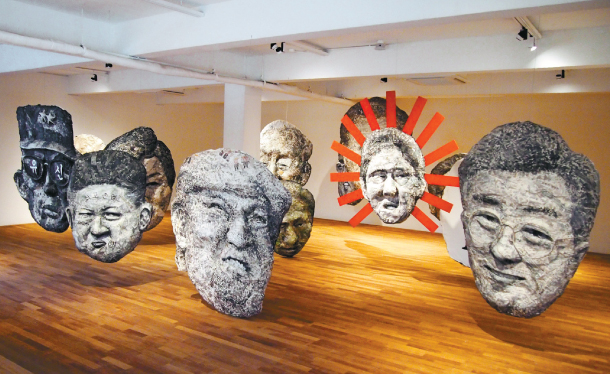 Masks of various world leaders throughout history are on display at the Gana Art Center in central Seoul, at Lim Ok-sang’s exhibit, which runs until Sept. 17. [YOON SO-YEON]

Last year when a series of candlelight vigils brought hundreds of thousands out to the streets of Gwanghwamun in central Seoul, the participants didn’t only stand around holding candles. Famous singers held concerts on stage and other artists held symbolic performances like throwing handcuffs and ropes towards the Blue House, calling for the arrest of former president Park Geun-hye.

Another artist, Lim Ok-sang, became known for his life-sized paper mask of Park’s face that he carried around while walking the streets each weekend.

The Gana Art Center in central Seoul opened the “Lim Ok-Sang: The Wind Rises” exhibition on Aug. 23. In the exhibit, which runs until Sept. 17, Lim presents 14 large-sized masks showing the faces of world leaders from across generations. From Park Geun-hye, to her late father Park Chung-hee, President Moon Jae-in to President Donald Trump of the United States, the exhibition starts with Lim’s humorous, yet strong identity as a “Minjung artist.” A Minjung artist refers to a group of artists who, similar to the Minjung, or public, political and social movements, sought to bring about democracy through art during the 1980s military dictatorship.

“Back then, during the candle light vigils, the government threatened that if protestors wore masks, that they would treat us like terrorists - like IS [Islamic State],” said Lim on Aug. 22 during a press meeting. “So I made a mask of Park Geun-hye’s face to say, ‘Hey, this is your face, what are you going to do about it?’ Then I went on to make masks of the leaders of other countries and generations. That’s how the series began.”

Lim is part of the first generation of Minjung artists, who was a part of an organization called “Reality and Speech” that stood in the center of Minjung art movements. As a Minjung artist, Lim observed social problems in the 1980s and voiced his opinions through various forms including paintings, sculptures, craft and live performances.

“We say something by not saying anything,” said Lim. “Silence is the language of art. My works are about what’s here right now.”

The artist’s works are indeed greatly influenced by what’s been on the news lately. Throughout the exhibit, works inspired by the pro-democratization vigils that took place last year in Gwanghwamun are on display, including a 160-meter (175-yard) long painting titled “Tide of Candles,” which depicts a night in Gwanghwamun Square, where Korean citizens called for justice be served. The paintings in the second part of the exhibit capture the moments in modern Korean history when the government failed to protect its own citizens, such as the death of farmer Baek Nam-gi, who was struck by a police water cannon in November 2015 during a protest.

“The goal of Minjung art is to help citizens find themselves and let them come forward with their own voice and express themselves,” said Lim. “It’s an honor that I’m called a Minjung artist, but it’s a shameful name, too. I haven’t been able to live up to that name. Now, I’m working more on the public side. I’m hoping that my works would open up something new for me.” 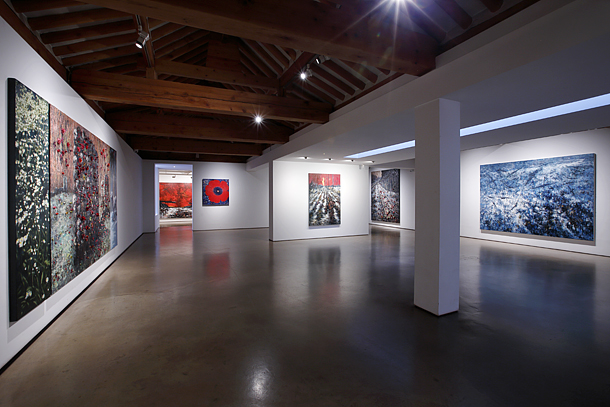 Another exhibition displaying the works of a Minjung artist is ongoing at the Hakgojae Gallery, central Seoul. Through Sept. 24, visitors can check out the “Song Chang: Flower-Shade” exhibition, which displays artist Song Chang’s works from the beginning of his artistic career in the 1984 to his most recent works in 2017. Song is known for his works concerning the two divided Koreas, such as “Refracted Time,” in which a single pine tree is painted on two separate canvases, symbolizing the long history of Korea. The image is divided in the middle by a rusty knife. Song is regarded as a Minjung artist because he believes that the division of the country is the root cause of the social and political issues of Korea.

His latest pieces, however, extend beyond just the tragic history of the Korean peninsula. In many of his paintings after 2010, Song has stuck fake flowers on the canvas, each symbolizing a life sacrificed in the violence of war in the 1950s, which not only divided the two Koreas in half, but also took innocent lives.

In “The Spring of That Place,” a piece composed of three canvas paintings of different scenes, is a separate story of the death of UN soldiers who lost their lives on Korean soil and their dogs who wait for them in their home countries.

“Song Chang’s works look strong and critical, which they are on the surface, but they carry hopeful wishes of a peaceful future,” said Kim Han-deul, the curator of the exhibition. “By showing the tragic realities of Korea and the world, the artist is actually painting a hopeful future for all of us. For example, each flower stuck on the canvas symbolizes each death suffered by a soldier, but life in the future. Song’s messages are strong but they’re also very soft.”