Gov’t to get rid of joint liability

Gov’t to get rid of joint liability 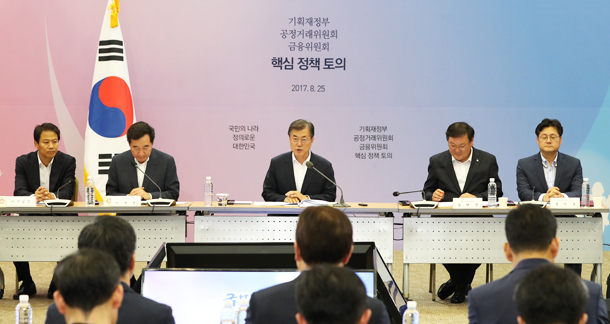 President Moon Jae-in, center, holds a discussion of major economic policies with the Finance Ministry, the Fair Trade Commission and the Financial Services Commission at the government convention center in Sejong on Friday. [YONHAP]

The government will abolish joint and several liability systems by 2018, as the Moon Jae-in administration sees the clause as a trap that hampers financial activity.

Joint and several liability refers to the rule whereby each party is independently liable for an extent of payments if a borrowing entity is unable to pay it off.

A trio of economic-related bodies - the Ministry of Strategy and Finance, the Financial Services Commission and the Fair Trade Commission - held a discussion on Friday with the president, reporting future policy directions.

The Financial Services Commission expected the abolishment to exempt an estimated 24,000 people from 7 trillion won ($6.2 billion) worth of obligations.

The regulator will also set aside 40 trillion won ($35.6 billion) in policy funds through 2021 to drive new growth based on technological advancement, the Financial Services Commission said on Friday.

The planned size of the fund, which can be used to provide loans, investment or guarantees, doubled from the current allocation and will benefit 11,000 companies whose businesses are relevant to the fourth industrial revolution. The Financial Services Commission said the financial injection will help create about 60,000 jobs.

In line with the Moon Jae-in administration’s continued focus on job creation, the Financial Services Commission will unveil a plan to convert contract workers in public financial corporations into regular ones in September.

The Financial Services Commission will also cut the maximum interest rates for lenders from the current 27.9 percent to 24 percent, starting next year, in a bid to ease the burden on debt holders.

Alongside the cut, the regulatory agency will also push for the reduction of card commission fees.

“We will increase the number of companies that can benefit from lower commission fees,” an official from the Financial Services Commission said. “A total of 460,000 mom-and-pop store owners will save around 800,000 won annually.”

The Fair Trade Commission will further its efforts to take on family-controlled conglomerates to foster a fairer business environment.

Kim Sang-jo, head of the Fair Trade Commission, said that the antitrust body will ban conglomerates from designating a specific company to make deals.

Some big companies have been accused of enforcing orders with their related companies, typically their affiliates.

The agency will also announce punitive measures for chaebol if they use a certain deal as a maneuver to facilitate leadership transfer of owning families.

Meanwhile, the Ministry of Strategy and Finance will push for participatory budgeting to engage people in budget allocation from next year, but the system has received mixed responses.

Some say that the adoption could make for a more democratic budgeting process, while others criticize it as populist.