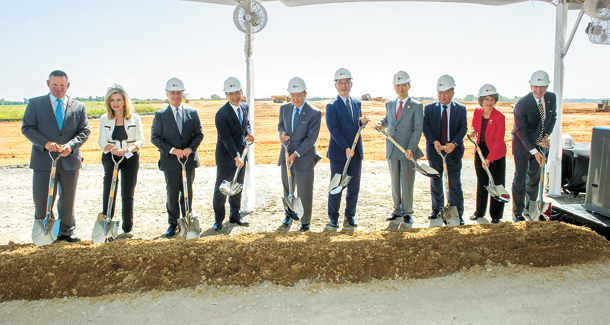 The company said on Friday that it has kicked off construction. It disclosed its intention to construct the plant in February by investing $250 million with the hopes of producing as many as 1 million washing machines per year. The construction of the plant is slated to be completed in the first quarter of 2019.

“Our decision to invest in the local production line was for the sake of sustainable growth in the United States, which is a key strategic market for us,” said the company spokesperson. “We also plan to maintain the supply [of washing machines] for the United States manufactured in Changwon, South Gyeongsang.”

Wilbur Ross, incumbent Secretary of Commerce of the United States, was also present at the ceremony that marked the start of the construction of the plant, the company said.

The plant will have a similar capacity as the factory in Changwon, a highly automated production line capable of manufacturing one washing machine every 10 seconds. The 1.25 million square meter (13.5 billion square foot) factory is expected to create as many as 600 new jobs in the region.

The company said it has been mulling over building a home appliance production site in the United States since 2010, considering various benefits, including cost-effectiveness and tax breaks.

LG Electronics was the third-leading washing machine seller during the first quarter of this year, trailing behind Samsung Electronics and Whirlpool of the United States. Earlier this year, Whirlpool reportedly filed a petition with the U.S. International Trade Commission against Samsung and LG, accusing them of selling washing machines produced in Asia at prices lower than their fair values.

The next stop in the company’s attempt to expand U.S. production will be a suburb of Detroit, Michigan. LG Electronics announced earlier this week that it will build a battery factory at Hazel Park, Michigan, by pouring in $25 million. The Hazel Park plant will also manufacture other electric vehicle components in the future. Its North American headquarters in Englewood Cliffs, New Jersey, will also be completed by 2019, after it began construction in February.