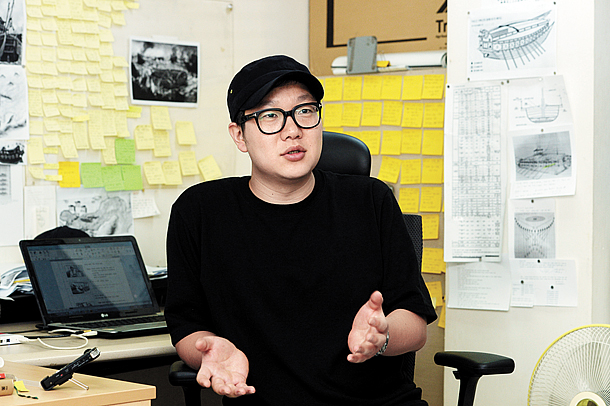 Kim Han-sol, a 37-year old documentary producer at KBS, was the force behind the five-episode series “Imjin War 1592” that aired on Korean Broadcasting System (KBS) 1TV in September. Its hero, Admiral Yi Sun-sin, is one of the most well-known historical figures in Korea.

The series was praised by critics around the world and won awards at the New York Film and TV Festival, the Houston International Film and Video Festival and Korea Broadcasting Prizes. Kim’s next project is also based on the 1592 Japanese Invasion.

It’s a feature film called “Gwuiseon,” which sounds like “Turtle Ship,” the armored warships supposedly invented by Yi. But Kim has substituted the first Chinese character in the title with a homonym, changing the meaning to “Ghost Ship.”

Kim, who met with JoongAng Ilbo recently at his office in Yeouido, western Seoul, explained that the title refers to “a ship that does not promise a return alive.” 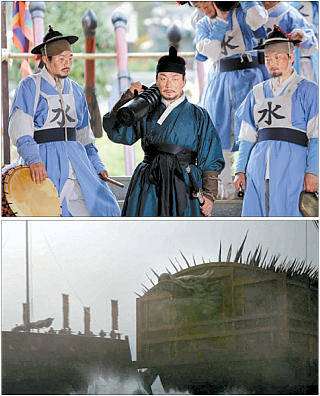 Above: Scenes from the KBS series “Imjin War 1592” produced by Kim Han-sol. Below: A Turtle Ship shown in the series. [KBS]

The main characters will be Admiral Yi and his crew on a famous Turtle Ship. The movie’s focus is on the humble rowers who desperately labored to keep the ship moving.

“Admiral Yi Sun-sin didn’t overlook the lowest ranked crew,” Kim said. “His victory wouldn’t have been complete if it wasn’t for them. I’m planning to shed light on Yi Sun-sin from a new perspective by depicting the relation between him and his low-ranked peers.”

Kim claims he will depict one of Yi Sun-sin’s unknown victories, which he discovered doing research for the film.

The exact purpose of the ship’s turtle head will be revealed in the movie along with a detailed demonstration of Yi’s military tactics.

The idea for the film came to Kim during his trip to the New York Film and TV Festival last April.

Producers from many countries were interested in the warship that appeared in the series and one from Europe specifically told Kim: “I want to see that ship in another piece.”

Kim joined forces with another film producer who liked his work, and the project started. The movie will start shooting early next year.

“I enjoy expanding small historical facts into big stories,” said Kim, who has been producing documentaries for 13 years. “I want to fill in historical voids based on facts and reasonable imagination.”

One of the characters in “Imjin War 1592” called Makdung was an example of this. The character was based on the skull of a five-year old from the period with bullet holes, found in 2005.

Where does Kim’s obsession for the Imjin War and Yi Sun-sin come from?

“For geopolitical reasons, we are facing difficulties similar to those in 1592 when the Japanese invaded,” he replied. “To prevent such a tragedy happening again, we have to continue studying Yi Sun-sin, who overcame difficulties during this time. The more I study, the more I’m attracted to this figure. This is how I became a Yi Sun-sin stalker.”

Admiral Yi will also be the main character for Kim’s piece after Gwuiseon, which will show the utopian side of Yi, who collected taxes, conducted a state examination for hiring officials and also cultivated land.

“Some say that they’re tired of stories connected to Yi Sun-sin, but in fact, there aren’t many out there that really portray him as a person. This is why we have to do more research on him.”