Lee Jae-yong is sentenced to five years behind bars

Lee Jae-yong is sentenced to five years behind bars 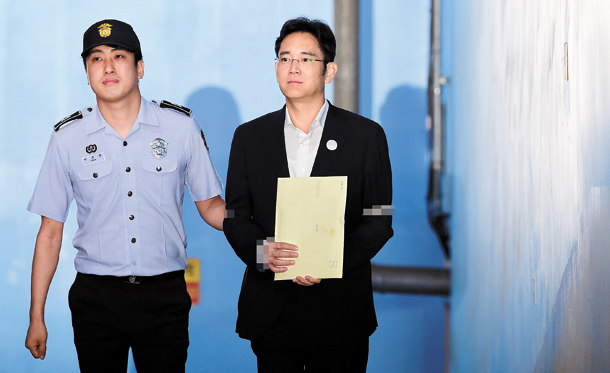 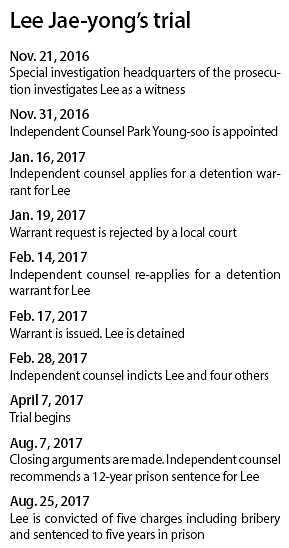 The court also convicted Choi Gee-sung, former vice chairman of the Samsung Group - who once headed the powerful Future Strategy Office of the conglomerate - and Chang Choong-ki, a former president of that office. They were each sentenced to a four-year prison term.

Choi was the second highest executive of the Samsung Group and a mentor to Lee after Lee’s father, Lee Kun-hee, collapsed in 2014 with grave health problems. After Samsung was tarred in the presidential scandal, the Future Strategy Office, the highest decision-making body of the group, was dismantled. The office was behind the decisions that led to the indictments ? and which were instrumental in the impeachment and removal of Park.

While convicting Lee and others for bribery, the court rejected some arguments by the independent counsel concerning the scope of bribes. The court said Samsung’s 7.2 billion won payment for Chung’s equestrian training as well as its sponsorship of the youth sports center were bribes. It, however, did not include unpaid promised funding for Chung and contributions to the Mi-R and K-Sports foundations, worth 20.4 billion won.

The independent counsel said it accepted the outcome and will continue to fight in the appeals trial to make sure that Lee and others face heavier punishments.

Friday’s ruling was closely connected to the trial of Park and Choi, accused as the receivers of the bribes. In criminal law, those receiving the bribes are punished more heavily than the givers. Park and Choi are currently undergoing a trial over corruption charges. A ruling is expected around October.

“We hope the ruling will serve as an opportunity to end the longstanding history of corrupt alliances between politicians and business, which has been an obstacle for our society’s advancement,” said Yoon Young-chan, senior presidential secretary for public relations at the Moon Jae-in Blue House.