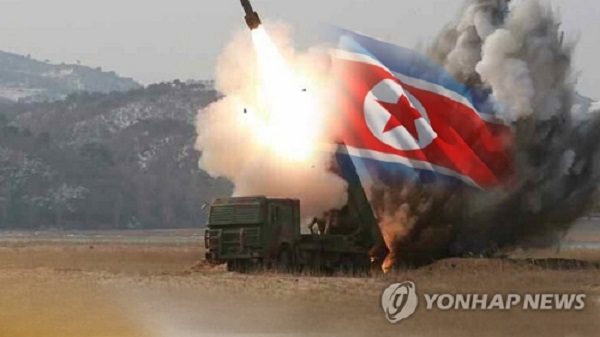 North Korea launched at least three ballistic missiles into the East Sea on Saturday morning, resuming a provocative act in a month despite Washington's diplomacy-first approach toward the belligerent regime.

The North fired "several unidentified projectiles" from the vicinity of Kitdaeryong in Kangwon Province starting at around 6:49 a.m., said South Korea's Joint Chiefs of Staff.

Some of those flew more than 250 kilometers (155 miles) in a northeastern direction, it added.

"The first and third missiles at 11:49 a.m. (Hawaii time) and 12:19 p.m. failed in flight," the Pacific Command's spokesman Cdr. David Benham said in an emailed statement. "The second missile launch at 12:07 p.m. appears to have blown up almost immediately."

The North American Aerospace Defense Command determined the launches from North Korea did not pose a threat to North America, he added.

The North's provocation was immediately reported to President Moon Jae-in. The Blue House convened a National Security Council meeting to discuss the issue.

"They have also decided to proceed more thoroughly with the ongoing UFG drills," he said, referring to Ulchi Freedom Guardian, an annual combined training drill between South Korea and the U.S. that opened on Monday.

While the allies said the command post training is defensive in nature, Pyongyang has long claimed that it's an invasion rehearsal.

The White House said President Donald Trump has received a relevant briefing. "In regards to activity in North Korea tonight the President has been briefed and we are monitoring the situation," its press secretary Sarah Huckabee Sanders said.

Gitdaeryong, located near the eastern city of Wonsan, is home to the North's Scud and Nodong missile base. Experts said the projectiles are believed to be Scud-type ballistic missiles with a range of 300 kilometers or newly developed longer-range ones.

"The launches seem to be Scud-B missile firing drills," said Kim Dong-yub, professor at the Institute for Far Eastern Studies at Kyungnam University. "But there is a possibility as well that it was aimed at improving the capability of KN-02 surface-to-surface missiles or KN-01 ground-to-ship missiles using solid fuel."

Solid-fuel rockets are easier to hide, transport and deploy than liquid-fuel ones.

The launches came a month after the communist nation test-fired another intercontinental ballistic missile. On Tuesday, U.S. Secretary of State Rex Tillerson openly said in Washington that, "I am pleased to see that the regime in Pyongyang has certainly demonstrated some level of restraint that we've not seen in the past." He expressed hope for dialogue with Pyongyang.

President Donald Trump also voiced cautious optimism when talking about the North's leader Kim Jong-un. "I respect the fact that he is starting to respect us," Trump said at a campaign rally earlier this week. "And maybe -- probably not, but maybe -- something positive can come about."

The North earlier threatened to shoot four intermediate-range ballistic missiles toward the U.S. territory of Guam.