For Dodgers, the Ryu Hyun-jin they know and love is back

For Dodgers, the Ryu Hyun-jin they know and love is back

If there’s anyone right now in Major League Baseball who deserves the title of comeback kid, it is Ryu Hyun-jin of the Los Angeles Dodgers. 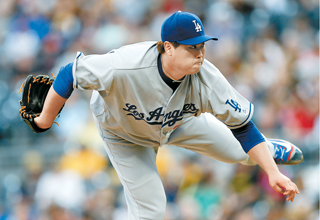 Ryu Hyun-jin of the Los Angeles Dodgers throws a pitch during a game against the Pittsburgh Pirates at PNC Park in Pittsburgh on Thursday. [AP/YONHAP]

The relentless Korean pitcher is playing beyond impressive in the second half of the season after powering through a dismal first half. He picked up his fifth win of the season on Thursday after the Dodgers topped the Pittsburgh Pirates 5-2 at PNC Park in Pittsburgh. Throughout six innings, Ryu gave up four hits, two walks and one run while striking out two.

The Dodgers’ victory made them the first out of the 30 MLB teams to pick up their 90th victory of the season and has guaranteed them a spot in the postseason. The Dodgers are leading the National League West by 20 wins.

Ryu, who had to miss the last two seasons because of an elbow surgery, struggled in the first half of this season after returning to the mound from recovery.

But since the start of the second half, his fastball speed has gone up to 150 kilometers per hour (90 miles per hour), and with better control of his pitches, he is now throwing as well as he did during his MLB debut. His fifth win this season lowered his earned run average from 3.45 to 3.34.

“This is the guy we saw,” Dodgers manager Dave Roberts told the Los Angeles Daily News on Thursday. “Hyun-jin, from what everyone says, is a big-game pitcher and he’s trying to earn continued opportunities. You respect that.”

Just looking at the six games Ryu has appeared in since the start of July, the Dodgers have won all six, and his ERA in those six games, 1.54, is good enough to be ranked second in the league. At this rate, Ryu will likely start in five to six more games and could also pick up two-digit wins this season.

“Still, Ryu’s position is likely to be the Dodgers’ bullpen pitcher in the postseason,” said Song Jae-woo, an analyst for MBC Sports+, a local broadcaster, “because Dave Roberts doesn’t fully trust the three lefty pitchers in the Dodgers’ bullpen. But if Ryu maintains his ERA in the 3s until the end of the season, there is the possibility of him ending up in the starting rotation.”

This season, the Diamondbacks are second in the National League West with 72 wins and 58 losses as of Saturday but is ranked first in the wild card.

Ryu will most likely be competing against the Diamondbacks’ lefty pitcher, Robbie Ray, who has picked up ten wins and five losses with a 3.06 ERA this season. As the Dodgers’ injured pitchers slowly make their return, Ryu has a good chance at finding a spot in the starting rotation for the postseason if he continues to perform well.