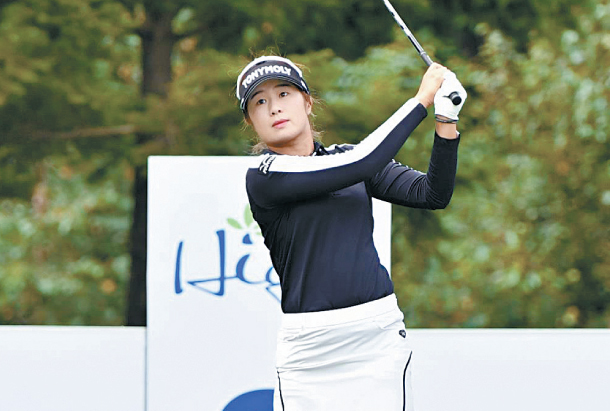 Lee Jeong-eun watches her shot during the final round of the High1 Resort Ladies Open in Jeongseon County, Gangwon, on Sunday. Lee defeated Jang Ha-na in the first playoff hole to win her third tournament of the season. [YONHAP]

Lee Jeong-eun captured the third title of her KLPGA career on Sunday, defeating Jang Ha-na in the first hole of a playoff round at the High1 Resort Ladies Open in Jeongseon County, Gangwon.

It was a come-from-behind victory for Lee, who started the final day of the tournament five shots behind the leaders Park Ji-young and Choi Yoo-lim. Although the 21-year-old got off to a slow start with a bogey on the par-four third, her fortunes turned in subsequent holes as Park and Choi struggled with bogeys while Lee continuously made birdies.

In total, Lee made seven birdies in the final round, with one shot on the par-five 11th propelling her up the leaderboard to tie for the lead. Then, with back-to-back birdies on the 16th and 17th holes, Lee took a solo lead for the first time this weekend, but it didn’t last very long as Jang tied the game with a birdie on the 17th.

Both players finished their rounds at nine under par, forcing the game into a sudden-death round. As they hit the fairway in regulation, it seemed as if victory was leaning toward Jang. Her second shot landed just short of the green, while Lee had pulled her second shot left, with about 30 yards chip remaining for an up and down. It left about 10 feet for a par; Jang had three.

But Lee seemed to make nothing of the 10-footer and easily made the putt for par. Jang, on the other hand, missed her three-footer, and Lee was declared winner.

With a tournament purse of 160 million won ($143,000), Lee has moved up to first in the 2017 KLPGA Tour money list and extended her lead on the KLPGA Player of the Year standings. Not only that, Lee has become the second player this season to win three tournaments, after Kim Ji-hyun.

Lee debuted in the KLPGA last season and won Rookie of the Year, though she never won a tournament. She has been making strides this season, and aside from her three titles, her statistics have significantly improved, ranking first in scoring average and within the top 10 in finish percentage.

Jang, who moved up to 13th in the money list, had to settle for runner-up, though it was her best finish on the KLPGA Tour since she started playing full time this season. The 25-year-old has yet to win a tournament on the KLPGA Tour since returning from the LPGA Tour, in defiance of fans’ expectations. She missed two cuts in a total of nine tournaments, but she is still guaranteed full status for the next season because she is finishing inside the top 60 on the KLPGA money list.

Lee Bo-mee, who returned to the tour for the first time in over a year, finished tied for third with an even-par round at seven under par over the weekend. Park Ji-young and Choi Yoo-lim finished tied for ninth and tied for third, respectively. Lee Seung-hyun was also competing for the top spot until the 16th, when she made back-to-back bogeys in the last two holes and dropped to sixth.

Next on the KLPGA Tour is the Hanwha Finance Classic, which starts Thursday at the Jade Palace Golf Club in Chuncheon, Gangwon. The tournament is expected to receive a lot of attention with Kim In-kyung and Choi Hye-jin competing. Kim is skipping an LPGA event to compete in Korea, and Choi, who just turned 18, is making her professional debut.