Hockney show portrays the artist as an aging man

Hockney show portrays the artist as an aging man

LOS ANGELES - The aspiring artist was 17 when he took pencil to paper in 1954 and sketched a stunningly mirror-like image of himself as a student at England’s Bradford School of Art.

In the 63 years since, David Hockney has become world famous, not for self-portraits, but for colorful painted landscapes, portraits of others and brilliant photo collages of everything from backyard swimming pools to scenic desert vistas.

Lesser known are the literally hundreds of self-portraits he also made over the years, many tucked away privately, seemingly to simply remind him of the changes time has wrought upon his appearance. Those changes are documented colorfully, and oftentimes humorously, in the exhibition “Happy Birthday, Mr. Hockney,” which opened at Los Angeles’ J. Paul Getty Museum earlier this summer in honor of Hockney’s 80th birthday. It runs until Nov. 26.

Along with a study of the artist’s changing appearance, visitors will also see one of Hockney’s most brilliant photographic works, 1986’s “Pearblossom Highway.” The rarely displayed collage of 700 photos of California’s high desert is one of more than a dozen Hockney collages on display. 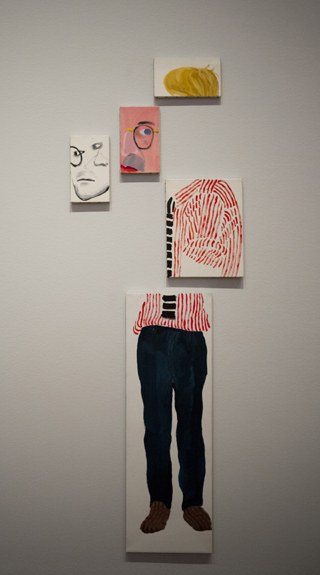 Hockney’s self-portrait, oil on five canvases, on display at the Getty Center in Los Angeles. [AP/YONHAP]

When the museum decided it wanted to do something to mark Hockney’s birthday last month - “a little tip of the hat,” says Julian Brooks, the museum’s senior curator of drawings - taking “Pearblossom” out of storage and putting it before the public was a no-brainer.

But officials also wanted a little something more for Hockney, who Brooks notes has all but been a neighbor of the museum since moving to Los Angeles in the 1960s.

London’s Tate Britain museum had already mounted a traveling Hockney retrospective earlier this year, however. It’s currently at Paris’ Pompidou Centre and will move to New York’s Metropolitan Museum of Art in November, and Getty officials didn’t want to copy that.

“So we thought, is there anything else we could do to show the passage of time that would be fun and interesting? And the self-portraits seemed like a natural idea,” Brooks said during a recent walkthrough of the exhibition.

To museum officials’ delight, the artist thought it was a great idea too. Hockney, who has homes in Los Angeles and his native England, opened up his personal archives and those of his foundation, letting Getty curator of photographs, Virginia Heckert, pick and choose.

Although he hasn’t publicly discussed the Getty exhibition, he’s visited and is said to be charmed.

“I have the vanity of an artist. I want my work to be seen. But I don’t necessarily have to be seen,” he told the Tate in a brief interview for its exhibition.

Hockney brings that same playful attitude to the most recent of the self-portraits displayed, a series created on his iPad in 2012 in which Brooks notes the artist seems intent on showing his grumpy-old-man side. In one image, he strikes a snarling, “Get off my lawn” pose. In another, he glares at his audience. In still another, he seems to look up in surprise at the person sketching him.

In a watercolor from 2003, the artist is dressed in a black shirt, tan pants and bright red suspenders and appears lost in concentration as he paints himself.

Taken together, the works show Hockney aging from dark-haired teenager in 1954 to man about town with dyed-blond locks and snappy clothes to gray-and-white-haired older gentleman. He holds a hand cupped to an ear in one, reflecting the hearing loss he’s suffered as he’s aged.

The collages, meanwhile, reveal Hockney’s acclaimed skill in creating painting-like images by assembling dozens of photographs taken of the same area, capturing one moment after another, then putting them all together.

One of the artist’s most recognizable such works is his colorful depiction of the Pearblossom Highway in Southern California’s Antelope Valley.

Visiting the highway 31 years ago when it was a rural two-lane road, Hockney spent nine days photographing every single image connected to it: blue desert sky, pavement, cactus, street signs, even trash. He assembled the 700 photographs into one stunningly colorful collage more closely resembling a painting than a picture.

“These are not click snapshots,” said Heckert, Getty’s photo curator. “He’s really working to create the image and to kind of imbue it with light, with time, with his own presence.”