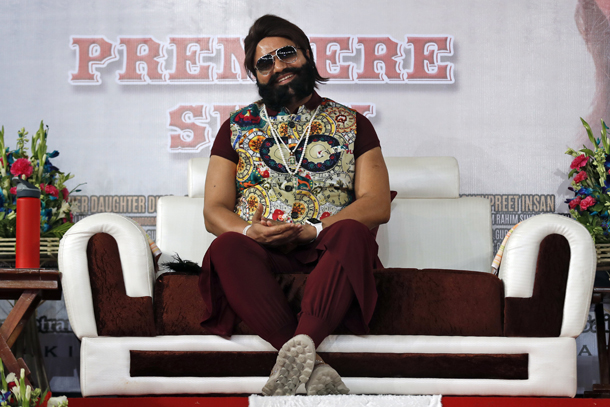 NEW DELHI - The millions of followers of the flashy Indian guru consider him the embodiment of God on Earth.

So when he was convicted of rape Friday, tens of thousands of supporters responded with fury, setting off riots that left more than two dozen dead and buses, trains and buildings set on fire. Police said calm was restored on Saturday.

The burly, bearded Insan, who according to the sect’s website was born to a wealthy landowner in Rajathan, became the sect’s third guru when he was anointed in 1990 at age 23 as the reincarnation of the previous leader.

But the bling-loving leader - he’s fond of red leather jackets, bejeweled hats, bicep-baring T-shirts - has another love: cinema. He has started a film franchise in which he stars as the “Messenger of God,” or MSG, with divine powers to save the world.

His most recent cinematic offering, “MSG - The Warrior Lion Heart,” was released last year, with the guru playing a secret agent armed with a twirled moustache and an assortment of swords to fight aliens and UFOs.