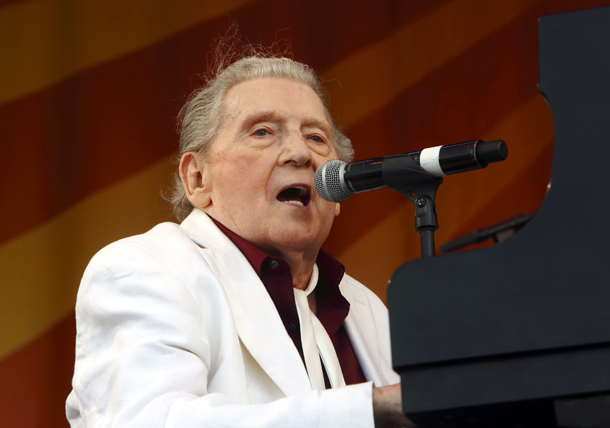 NASHVILLE, Tennessee - Jerry Lee Lewis is one of the early pioneers of rock ‘n’ roll music, but he doesn’t understand why his contributions to country music haven’t been recognized by the Country Music Hall of Fame.

Now 81, Lewis said that when he first came to Nashville from Louisiana, he was advised to pick up a guitar instead of playing the piano.

“I was trying to get a record out and get my start in the business and they really didn’t want any part of rock n’ roll,” Lewis said in an interview Thursday in Nashville, where he was being honored by artists such as George Strait, Kris Kristofferson, Chris Stapleton and Lee Ann Womack during the live concert series Skyville Live.

He quickly found fame under the guidance of Sam Phillips at Sun Records in Memphis, where he played alongside Elvis Presley, Carl Perkins, and Johnny Cash in the now famous Million Dollar Quartet. His outrageous talent, energy and ego were showcased on his early hits like “Great Balls of Fire” and “Whole Lotta Shakin’ Goin’ On.”

But his career was nearly derailed over the scandal of his marriage to his 13-year-old cousin, Myra, and he spent several years blacklisted before mounting a return to the country charts in the late ’60s. He had top country singles like “What Made Milwaukee Famous (Has Made a Loser Out of Me),” “She Even Woke Me Up to Say Goodbye,” and “To Make Love Sweeter for You.”

Recently a petition was started online to call attention to his exclusion from the Country Music Hall of Fame. Lewis was among the first inductees into the Rock & Roll Hall of Fame in 1986.