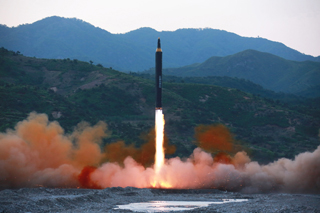 Kim Jong-il’s first nuclear test in 2006 was a game changer in U.S.-North Korea relations and shifted the Bush administration’s approach to North Korea.

Before the test, the administration adhered to the six-party framework, but the next year, those meetings took a backseat to direct dialogue between the two countries.

The Feb. 13 agreement that came out of the six-party talks, in which North Korea agreed to suspend development of nuclear weapons in exchange for oil, was a product of meetings between the United States and North Korea.

It was a dramatic change in direction for President George W. Bush, who once called North Korea part of the “axis of evil.” Without the nuclear test, Bush wouldn’t have moved.

The test agitated Washington and began a battle of rhetoric between President Donald Trump and Pyongyang.

Based on what foreign affairs and defense ministers from South Korea and the United States said, the official position appears to prioritize diplomacy, with military options as back-up.

Pyongyang’s missile launch and verbal protests exposed the inner thoughts of some Washington insiders. Their tolerance for North Korea’s nuclear program has begun to emerge.

In a New York Times op-ed, Susan Rice, former national security adviser, wrote, “History shows that we can, if we must, tolerate nuclear weapons in North Korea — the same way we tolerated the far greater threat of thousands of Soviet nuclear weapons during the Cold War.”

She set the red line as any use of nuclear weapons or transfer to other parties. Rice, who allowed North Korea’s nuclear capabilities to grow under President Barack Obama’s “strategic patience” policy, is now promoting deterrence and keeping the current state.

Other experts share the same view, and North Korea would certainly welcome it. Pyongyang has been advocating a meeting with the United States over nuclear arms, not denuclearization.

There is an inconvenient truth behind these arguments to tolerate North Korea’s nuclear weapons and maintain the status quo. It is the self-absorbed pacifism of the United States.

If the United States freezes North Korea’s program in its current state, the threat to its mainland is reduced, but South Korea and its neighbors are still exposed to North Korea’s intermediate- and short-range missiles.

If the United States prioritizes its citizens’ safety, the future of U.S. forces in South Korea is unclear. Just because North Korea’s nuclear threat has become real does not mean the strategic goal of denuclearization and realistic solutions should be abandoned. This is the principle that Pyongyang and Washington should abide by when they talk. Submission is not an option.

*The author is the Tokyo bureau chief at the JoongAng Ilbo.