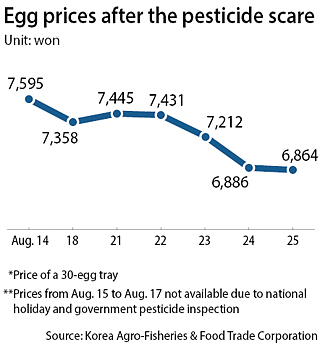 Just days after major retailers slashed egg prices en masse in response to low consumer demand on Wednesday, they did it again over the weekend.

It’s the first time this year that the price of 30 eggs at the three discount chains has fallen below 6,000 won. Egg sales have been struggling for the past several weeks in the wake of a consumer scare over pesticide contamination at farms. As a result, retailers have been precipitously slashing egg prices in hopes of stimulating demand. Before the weekend discounts, the three retailers had already reduced the price by as much as 1,010 won on Wednesday.

“We decided to lower the price due to the falling demand of eggs after the pesticide scandal,” a spokesperson from Emart said. “The supplier price also took a hit dramatically.”

On Aug. 14, the government discovered that an egg farm in Namyangju, Gyeonggi, was using fipronil, a pesticide that can cause headaches and damage organs if consumed by humans. That day, the price of 30 eggs stood at 7,595 won, according to data from the Korea Agro-Fisheries & Food Trade Corporation.

Four days later, the price of eggs took a slight hit, going down to 7,358 won, and continued to fall afterward, save for a small recovery in between. By Friday, the price had fallen below 7,000 won to 6,864 won. Friday’s price is 11.6 percent lower than the price a month before on July 25.

Vegetable and fruit prices, on the other hand, have been skyrocketing due to extreme summer heat and unusually heavy rain.

“The heat followed by heavy rain has contributed to the rise in prices of agricultural products,” an industry source said. “We will have to wait for Chuseok [Korea’s harvest festival] and the summer to pass until the prices of eggs and other products stabilize.”