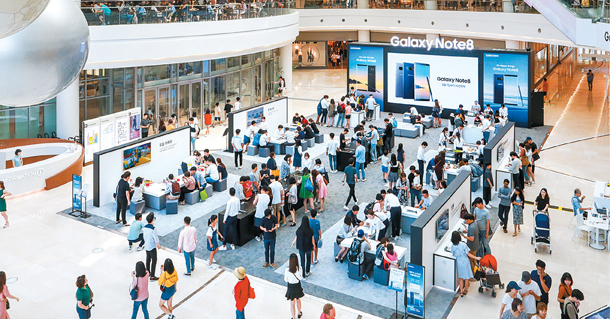 A view of Samsung’s Galaxy Studio for the Note8 at the Times Square mall in Yeongdeungpo District, western Seoul. [SAMSUNG ELECTRONICS]

Samsung Electronics and Korea’s three biggest mobile carriers are pulling all the stops to plug the phone maker’s latest “phablet,” the Galaxy Note8, just as the electronics company is also regrouping from the stinging sentence of its de facto leader to five years in prison for corruption.

The tech giant said Sunday that it plans to open promotional zones called “Galaxy Studios” at 80 shopping malls, department stores and train stations nationwide, with 40 more in universities and movie theaters by October.

The venues range from shopping centers like Times Square in Yeongdeungpo District, western Seoul, to KTX stations like the one in Busan.

The company said the promotion is its biggest effort yet for a flagship phone like the Note8.

Samsung is striving to retain its post as the world’s top smartphone maker, but the company ran into a stumbling block on Friday after its vice chairman and heir, Lee Jae-yong, was sentenced to five years in prison for bribing Korea’s former president, Park Geun-hye. The stinging rebuke came just a day after it took the wraps off the Galaxy Note8 in New York.

The Galaxy Studios will let visitors try the new phone, which comes with a stylus that the company calls the “S-pen.” Visitors can write messages, draw pictures and even make GIF animations with the pen. The ability to record each pen stroke is a new feature of the Note8 stylus.

SK Telecom, the country’s largest telecommunications provider, will also operate Note8 experience zones at the 1,200 phone stores it runs. KT will open 900 zones, and LG U+, the smallest mobile carrier, will have 500.

SK Telecom noted that the Note8 is already popular among customers in their 30s and 40s.

Of the prospective buyers who have asked SK Telecom to alert them when the phones are ready to ship, 64 percent of them are in that age range. Forty-three percent of them were already using previous versions of the Galaxy Note.

Samsung said it will begin accepting preorders for the Note8 on Sept. 7, and shipments are scheduled to start on Sept. 15.