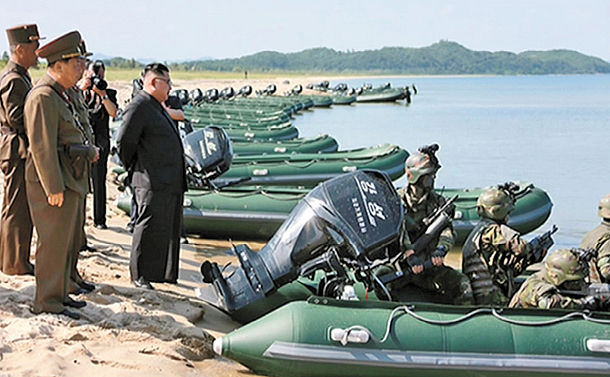 North Korea fired three short-range projectiles off its eastern coast Saturday morning in what Seoul considers a protest of the ongoing military exercises between South Korea and the United States.

The projectiles were fired from Kittaeryong in North Korea’s Kangwon Province starting at around 6:49 a.m. The first and third flew for about 250 kilometers (155 miles) before landing in the East Sea, while the second exploded almost immediately after liftoff, according to South Korea’s Joint Chiefs of Staff.

Seoul and Washington haven’t agreed yet whether they were rockets or missiles. A missile is usually equipped with a guidance system that helps it reach its destination, while a rocket flies to wherever it is pointed.

The Blue House said it appeared they were “rockets fired from a 300-millimeter multiple-launch rocket system,” adding they were capable of targeting the Gyeryongdae complex, South Korea’s headquarters of the army, navy and air force in Gyeryong, South Chungcheong, as well as the U.S. military base in Pyeongtaek, Gyeonggi.

The U.S. Pacific Command said its initial assessment indicated they were “short-range ballistic missiles” that didn’t pose a threat to Guam, a U.S.-controlled island in the Western Pacific. Since early this month, North Korea has been threatening to target waters off the island, which hosts strategic U.S. military bases.

The North American Aerospace Defense Command said it determined that the three ballistic missile launches did not pose a threat to North America.

Japanese Chief Cabinet Secretary Yoshihide Suga said the projectiles didn’t pose a threat to the security of Japan, neither did they land within Japanese territory or inside its exclusive economic zone, according to the Japan Times. Tokyo’s Defense Ministry reportedly said the launches may have been of “multiple short-range ballistic missiles or rockets.”

Asked by local reporters about the allies’ differences in identifying the North Korean projectiles, a senior Blue House official said further analysis was ongoing and that a more detailed assessment was to be made by the South Korean Joint Chiefs of Staff in the near future.

The official, who spoke on background, said Saturday that North Korea seemed to have fired the rockets in a show of protest of the ongoing Ulchi Freedom Guardian drill between South Korea and the United States, which is slated to end Thursday.

Seoul isn’t taking Pyongyang’s latest rocket test too seriously, the source continued, because they weren’t ICBMs and Pyongyang has often carried out military provocations during joint drills. The South Korean government didn’t issue any condemnatory statements, though the Blue House convened a National Security Council meeting on Saturday from 8:30 a.m., which lasted about an hour. The meeting was presided over by Chung Eui-yong, head of the council.

Neither has Washington, Beijing nor Tokyo issued any remarks criticizing the North for its latest test. White House Press Secretary Sarah Huckabee Sanders said only that President Donald Trump had been informed about it, adding, “We are monitoring the situation.”

However, it did write on Saturday that a “target striking contest of the special operation forces of the Korean People’s Army” took place on the occasion of the Day of the Songun, which marks the beginning of former leader Kim Jong-il’s military-first policy in 1960. The article didn’t mention when the event was held, but the Day of the Songun fell last Friday.

The KCNA reported that leader Kim Jong-un guided the contest on-site, and the core mission was to shell South Korea’s northernmost islands of Baengnyeong and Daeyeonpyeong in the Yellow Sea.

“Combatants wiped out the desperate enemy with various combat methods,” an English dispatch of the KCNA article read, adding that the islands “enveloped in flames in a moment and shouts of hurrahs rocked heaven and earth.”

On Friday, China’s Ministry of Commerce announced a ban on North Korean nationals and companies from doing business in China, enforcing United Nations Security Council resolutions passed earlier this month to condemn Pyongyang’s two intercontinental ballistic missile tests in July. The measure, which takes effect immediately, also prohibits Chinese companies from opening new businesses in the North or expanding whatever is already there.