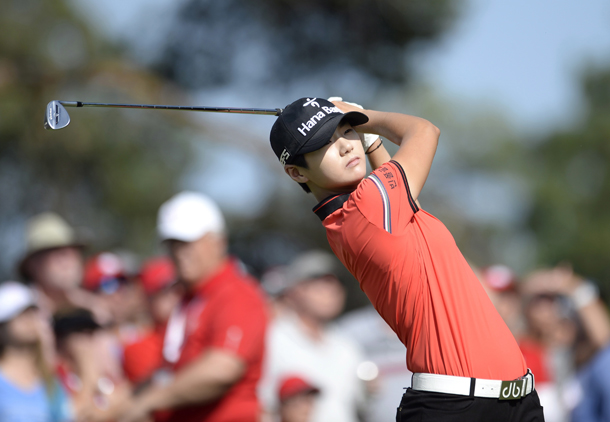 Park Sung-hyun watches her shot during the final round of the 2017 Canadian Pacifici Women's Open at Ottawa Hunt and Golf Club on Sunday. [AP/YONHAP]

Korea just made history with five consecutive LPGA Tour wins, thanks to super rookie Park Sung-hyun overcoming a four-shot deficit on Sunday to capture her second LPGA Tour victory of the season at the Canadian Pacific Women’s Open at Ottawa Hunt and Golf Club in Canada.

“I think it was a perfect game today,” Park was quoted as saying on LPGA website. “There were no mistakes today, and I think it was perfect.”

Park started the final round tied at 12th, four shots behind the leader. She played an almost-perfect round, shooting a bogey-free round of seven under par. On her last round, she hit 15 out of 18 greens in regulation and only missed two fairways. Her putting was on point, too, with only 28 putts. 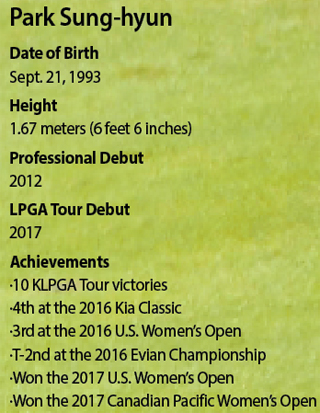 Starting with Park’s birdie on the par-four third and sixth, she made three consecutive birdies from par-three eighth to quickly make her way up the leaderboard. With another birdie on par-four 16th, Park took sole lead, and by hitting the green on her second shot of the par-five last hole, she extended her lead by two shots ahead of Lee Mi-rim.

With the winning purse of $337,500, Park is now the new leader on the 2017 LPGA Tour money list and is once again guaranteed this year’s Rookie of the Year award with a total of 1,285 points. She also now has a shot at Player of the Year, being only 20 points away from current leader, Ryu So-yeon.

“Because I am a rookie, I don’t really worry about every shot,” Park was quoted as saying on LPGA website. “I just did every shot with confidence. My confidence made me do well this year.”

Park joined the LPGA Tour this season without having to go through qualifying school, as she earned her full-time status by finishing 25th on the LPGA Tour money list from seven tournaments she played in under invitation. But before Park left to play on the LPGA Tour, during the 2016 season, she dominated the KLPGA Tour, winning six tournaments in a season and winning multiple categories, including scoring average, driving distance and official money ranking.

Park started the Korean golfers’ winning streak in July with a victory at the U.S. Women’s Open at Trump National Golf Club at Bedminster, New Jersey. Then Kim In-kyung won two tournaments for her third victory of the season at the Marathon Classic presented by Ownes Corning and O-1, and the Ricoh Women’s British Open. Before Kim’s victory at the British Open, Lee Mi-hyang won the Aberdeen Asset Management Ladies Scottish Open to continue the Korean winning streak.

Aside from Park’s victory, four Korean golfers have managed to record top-ten finishes, as Chun In-gee finished tied for third and Kim Hyo-joo finished tied for eighth. With two eagles, this was Lee’s best finish since her victory at the Kia Classic in March.

Chun, who was the leader after the second round, had to step away again from winning her first tournament of the season. This marks Chun’s sixth runner-up finish of the season. She hasn’t won a tournament since her victory at the Evian Championship in September 2016.