Choo Shin-soo of the Texas Rangers hit his 16th home run of the season during a game against the Oakland Athletics at Oakland Alameda Coliseum on Sunday. But despite Choo’s home run, the Rangers lost 8-3. 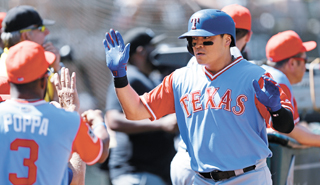 Choo Shin-soo of the Texas Rangers celebrates with his teammates after hitting a home run during the Rangers’ game against the Oakland Athletics at Oakland Alameda Coliseum on Sunday. [AP/YONHAP]

Choo, who appeared as the Rangers’ second batter and a right fielder, was one-for-four with one RBI. The only hit Choo had throughout the game was his home run, as he was struck out in the first and third innings.

While the Rangers were down 3-1 in the top of the fifth, Choo hit Jharel Cotton’s changeup, pitched at a speed of 127 kilometers (79 miles) per hour, over the right fence for a solo home run.

Choo appeared again in the top of the eighth but was grounded out. By giving up four runs in the bottom of the eighth, the Rangers had a sweep loss to the Athletics, who are ranked last in the American League West.

This was Choo’s first home run since the game against the Chicago White Sox on Aug. 20. After the game, Choo maintained his batting average at 0.262.

Following time on the disabled list last year, Choo is having another great season, as his home run pace is on track to exceeding his personal best of 22 during the 2010 and 2015 seasons.

Starting on Tuesday, the Rangers will start their three-game series against the Houston Astros at Minute Maid Park in Houston.

Meanwhile, Oh Seung-hwan of the St. Louis Cardinals appeared briefly in the game against the Tampa Bay Rays at Busch Stadium on Sunday. But despite Oh’s scoreless pitching, the Cardinals lost 3-2 in an extra tenth inning.

This was the first time in four days for Oh to make an appearance and record another scoreless two pitches, only making a total of six pitches. Oh appeared on the mound while the Cardinals were losing 2-1 in the top of the eighth. He allowed a hit to Steve Souza but managed to fly out the Ray’s next batter, Evan Longoria.

With Logan Morrison still at bat, the Cardinals substituted lefty pitcher Zach Duke and, as he didn’t allow any runs, this barely affected Oh’s ERA, which went from 3.86 to 3.83.

As the league had its Players Weekend, in which players wear personalized uniforms with their nicknames, Oh appeared in the game wearing a uniform with his name written in Korean.

Next, on Tuesday, the Cardinals will start their two-game series against the Milwaukee Brewers at Miller Park in Milwaukee.