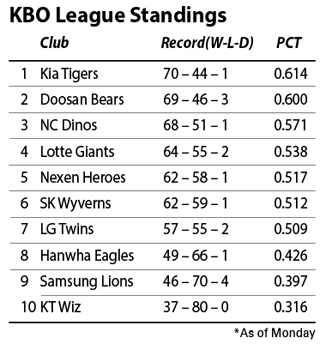 While the Kia Tigers struggle to maintain their first-place spot in the Korea Baseball Organization, the defending champions from last season, the Doosan Bears, are slowly catching up and hoping for another shot at topping the regular season again.

Up until a month ago, there was no doubt that the Tigers would the regular season, as they were 5.5 games ahead of the second-place NC Dinos and eight games apart from the Bears. While the Bears quickly moved up to second in the second half of the season, it still seemed like catching up to the Tigers would be a difficult feat.

But last week, the KBO standings saw a lot of reshuffling, with the Bears winning five games and tying one, and the Tigers winning just one game while losing four.

With that, the Bears are now just 1.5 games away from becoming the top-ranked team.

Meanwhile, the LG Twins and Nexen Heores were battling for the fourth and fifth spots, and the Lotte Giants have slowly moved their way up to fourth from seventh at the end of the season’s first half. Since the Giants’ game against the Hanwha Eagles on Aug. 20, they have gone on a six-game winning streak that was broken by a loss against the Heroes on Sunday.

Nonetheless, the six games have helped the Giants significantly, and they are now safely fourth in the KBO and 2.5 games ahead of the Heroes.


The Giants have another important week coming up as they start their two-game series against the Bears at Jamsil Baseball Stadium in Seoul today and another two-game series with the Dinos at home in Busan.

In the past 10 days, the Twins have dropped three ranks to seventh while the SK Wyverns have moved up a spot thanks to a four-game winning streak. But the Twins’ standing can change any time, as they have the most game cancellations, at 12. Since the games will be rescheduled for later in the season, the 12 games for the Twins could be a risk or an opportunity. 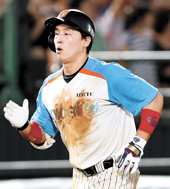 At the end of every game, Son Ah-seop’s uniform is always covered in dust. Whether it’s a home run or a hit, Son always runs as fast as he can to first base. Even with the risk of injury, Son doesn’t mind sliding into the base headfirst.

And with Son playing his hardest in every game, the Giants are also hitting their stride. Since their game against the LG Twins on Thursday, Son has managed to hit a home run in every game and during their match against the Nexen Heroes on Sunday, Son achieved his first 20-20, becoming the 46th player in the KBO to do so and second player this season, after Roger Bernadina of the Kia Tigers.

The 29-year-old outfielder hit a three-run homer while the Giants were losing 9-4 at the bottom of the ninth. It wasn’t enough to overcome their five-run deficit, but Son played well during the game, scoring a total of nine runs.

Up until April, Son’s batting average was 0.276, but starting in May, he slowly improved, and his average is now at 0.344 with 20 home runs, 71 runs batted in and 22 stolen bases. Although his batting average is not as good as during his 2014 season, at 0.362, it is a great improvement compared to his past two seasons.

Son, who is playing in his 11th season in the KBO, has been considered one of the most consistent players in the league, winning the Golden Glove Award for four consecutive seasons and maintaining his batting average above 0.300 every season.

After this season, Son will become a free agent, but before that, he is very likely to set some new personal records. With 23 games remaining in the regular season, Son is only 19 hits away from exceeding his record from last year, at 186.