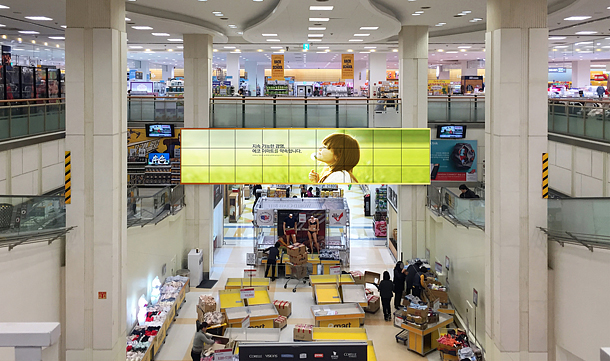 Emart will collaborate with Samsung Electronics to install a digital signage system in branches starting with the Jukjeon branch in Yongin, Gyeonggi, above. [EMART]

Emart will collaborate with Samsung Electronics to use technology to improve the customer experience in its stores.

Shinsegae’s discount chain said Monday it has struck a partnership with the country’s No. 1 IT company to install what’s called a digital signage system at its branches.

Digital signage is advertisements that uses digital displays such as LED screens or computer monitors instead of banners or leaflets. It enables real-time updates and intercommunication with customers in stores.

“Digital signage has potential because advertisements can be updated at any time and it’s able to play video and music, while traditional signs could only display words and pictures,” Emart said in a statement.

Emart will first install the technology at its Jukjeon branch in Yongin, Gyeonggi. The company said it will convert 80 percent of the branch’s indoor ad banners to digital screens by October.

The discount chain said it will invest 20 billion won ($17.9 million) next year to equip 30 of its branches nationwide with digital advertisement platforms.

Emart said the technology will enable more precise targeting of customers. Emart said it could use big data analysis to figure out which items are sought after at which times of the day and play different advertisements accordingly.

The company is also cooperating with Samsung Electronics to develop what’s called a “Heat Map,” shopping pattern analysis technology it will launch in October.

“Heat Map” will enable Emart to analyze the movements of customers in stores. It will use the information to more effectively arrange products on shelves.

The discount chain operator also said Monday it is developing profiling technology that identifies a customer’s gender and age through facial recognition technology. That will enable the company to play different advertisements depending on the customer passing by.

“Emart is not only innovating products but also is innovating its infrastructure,” said an official at Emart. “Partnering with Samsung Electronics on the digital signage system will be key to the company’s future plans.”