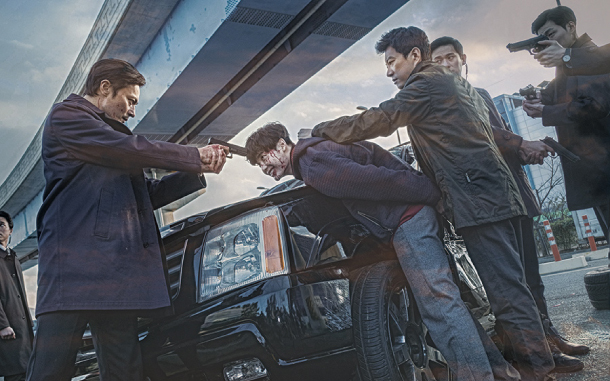 Despite being hit with criticisms for its depiction of violence towards women, the newly-released crime drama “V.I.P.” was the winner of Korea’s weekend box office, while “A Taxi Driver” stayed close at second.

The star-studded “V.I.P.,” featuring Jang Dong-gun, Kim Myung-min, Park Hee-soon and Lee Jong-suk, topped the country’s box office from Friday to Sunday by selling 599,000 tickets at 996 screens, bringing its total ticket sales to 940,000 admissions since it hit theaters on Wednesday.

Presented by Warner Bros. Korea and directed by “New World” (2013) director Park Hoon-jung, the film revolves around a serial killer from the North, who is being chased down by a national intelligence agent, the police and a team from the United States Central Intelligence Agency - each with their own agenda.

Close behind was “A Taxi Driver,” which recently surpassed the ten million ticket sales milestone, and is nearing 11.4 million thanks to the weekend’s ticket sales, during which it sold 530,000 admissions. The Showbox-distributed flick, which became the first movie this year to achieve the milestone, accounted for 21.4 percent of the weekend’s entire ticket sales in its fourth weekend - not far behind the 25.1 percent of sales held by “V.I.P.”

The ticket sales difference between the second and the third movie was even closer.

The action comedy revolving around two awkward, yet ambitious Korean National Police University students who take tracking down criminals into their own hands has so far sold a total of 4.8 million tickets.

“The Mimic,” Korea’s only local horror movie released this summer, held the fourth spot with 241,000 admissions sold while “War for the Planet of the Apes,” the last in a series of “Ape” trilogy, rounded out the top five with 203,000 admissions sold.