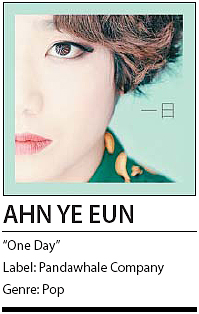 Listening to Ahn Ye Eun’s “One Day,” the German group Fool’s Garden came together in mind. Known in Korea for its song “Lemon Tree,” Fool’s Garden songs touch on a wide range of topics using vivid melodies. Ahn resembles Fool’s Garden in the way she writes lyrics - with an appealing gravity. The “K-pop Star” season 5 semi-finalist drew praise from judge Yoo Hee-yeol for her unconventional and novel style. “One Day” finds the singer moving away from her folk/rock sound to a more ballad-focused song selection, which some would say is friendlier to a broader audience.

The album is made up of four songs written and composed by the singer, all of which bring out her signature sparkling vocals. Listening to the album’s lead single “Yes!” and the track, “Deep Blue,” one feels like Ahn is uttering a confession - the inner thoughts of a woman who has just ended a romantic relationship.

The album’s two other tracks, “Little Kingdom” and “Spring, Hand, Night, Dream” offer a completely different mood and the listener finds themselves feeling like they are part of a fairy tale.