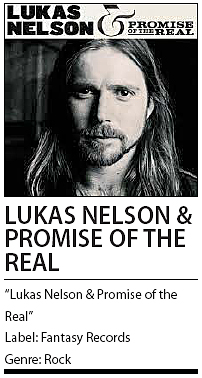 First, let’s just get this out there: Lukas Nelson sounds a lot like his famous dad, the red-headed stranger better known as Willie Nelson.

Secondly, don’t let the striking similarities in their vocal styles and deliveries cloud your judgment of the younger Nelson. At 28, he is the real deal and deserves to be treated seriously independent of his father’s legacy.

On his latest self-titled release with his six-piece band Promise of the Real, Lukas Nelson delivers a haunting collection of 12 songs that’s steeped in musical influences from his dad to recently departed Glen Campbell, Waylon Jennings and Neil Young.

Lady Gaga appears on a couple tracks and vocalists Jess Wolfe and Holly Lessig of the indie-pop group Lucius back Nelson on the opening, and best, tune “Set Me Down on a Cloud.” Nelson’s quivering vocals over the more-than-7-minute country-rock ballad, accented by his lilting guitar and Lucius’ singing, is enough to give you goosebumps.