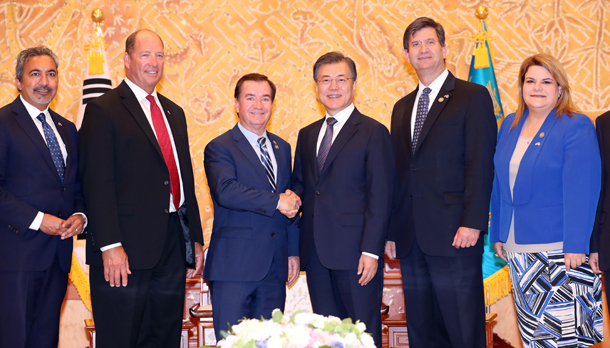 President Moon Jae-in said on Monday the North Korean nuclear situation should be resolved “through dialogue eventually in combination with pressure and sanctions” during his meeting with a group of U.S. bipartisan lawmakers at the Blue House.

Moon made the remark during his meeting with a five-member delegation of U.S. House representatives, led by Ed Royce, who chairs the House Foreign Relations Committee.

“If we were to take gradual steps to achieve the goal of the North’s denuclearization,” said Moon during a 40-minute meeting that began at 11 a.m. at the Blue House, “each process should have a firm and irreversible verification process.”

On the Korea-U.S. alliance, he said it was “expanding into economic, social and cultural areas from the military and national security arena,” while promising the U.S. House members that Korea would serve its role as a U.S. partner in fostering democracy, human rights and preventing terrorism around the world.

On the Korea-U.S. Free Trade Agreement, for which the two sides sat at the table to decide whether to amend it last week but failed to reach an agreement, Moon said it was the most “advanced” FTA that the United States has signed with Asian nations and that it was greatly helping the economies of the two allies. Moon added he would do his part in marking the Korea-U.S. FTA more beneficial for both countries.

Responding to Moon’s comment, the U.S. delegation agreed that the two countries should strive for a “peaceful resolution” on the North Korean nuclear issue through sanctions and pressure, according to the Blue House.

Royce authored a North Korean sanctions bill aimed at enhancing existing sanctions against the reclusive state that was passed through the House on May 4. As the bill’s author, he noted on the passage back then that “the threat from North Korea is real, and real threats demand real responses.”

During his meeting with Moon, Royce called Seoul-Washington relationship a “special relationship” that is “cornerstone of our relationship in Asia.” The four other U.S. House members in the delegation were Ted Yoho, Ami Bera, Brad Schneider and Jenniffer Gonzalez. The delegation will meet with South Korean lawmakers and business leaders as well as visit the demilitarized zone during their stay here. They leave on Wednesday.