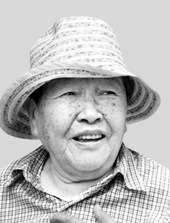 Another South Korean woman who was forced into sexual servitude by Japan during World War II died Monday, a civic group said, reducing the total number of the country’s surviving victims to 36.

The Korean Council for the Women Drafted for Military Sexual Slavery by Japan said that Ha Sang-sook died of sepsis at 9:10 a.m. at the age of 89. Her memorial altar is set up at Kyung Hee University Hospital in eastern Seoul.

Ha was forced to serve at an overseas military brothel in 1944 when she was only 16. After Korea was liberated from Japan’s 36-year colonial rule in 1945, she lived in China for some six decades. She returned to South Korea only in 2003.

A native of Seosan, South Chungcheong Province, Ha has actively participated in street rallies and other activities to shed light on Tokyo’s wartime atrocities and demand its sincere apology.

Historians estimate that up to 200,000 women, mostly from Korea, were forced to work in front-line brothels for Japanese troops during wartime.

In December 2015, Seoul and Tokyo reached a landmark deal in which Tokyo expressed an apology for its colonial-era atrocities and agreed to provide 1 billion yen ($9.16 million) for a foundation aimed at supporting the victims, euphemistically called comfort women.

Many victims, however, rejected the deal, saying it was forged without sufficient consultation with them. President Moon Jae-in has acknowledged that most Korean citizens cannot accept the deal “emotionally,” raising the prospects of a renegotiation.