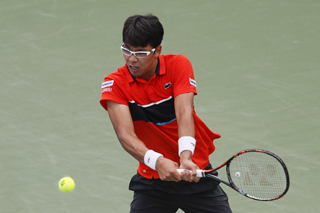 Chung Hyeon defeated Horacio Zeballos of Argentina during the round of 128 of the U.S. Open at the USTA Billie Jean King National Tennis Center in New York on Monday. [AP/YONHAP]

At the USTA Billie Jean King National Tennis Center on Monday, Chung Hyeon, ranked 47th worldwide, lost the first set 3-6 to Zeballos, ranked 58th, who is one of only four players ? along with Roger Federer, Novak Djokovic and Andy Murray ? to ever beat Rafael Nadal, the “King of Clay,” in a clay-court trial. But Monday’s match was played on a hard court, and the Argentine claycourter’s edge soon slipped away.

After a slow start, struggling with serve errors and double faults, Chung took the next three sets with solid serves, targeting the corners. Throughout the match, he fired off 16 serve aces while Zeballos only had 13, a major change for Chung, since his serve was considered a weakness up until the beginning of last year. He now has at least 45 ranking points, a winning purse of $86,000 and will advance to the U.S. Open round of 64 for the first time since 2015.

Though he took some time off midway through the season, this is by far the best one of his career, as he got inside the Association of Tennis Professionals (ATP) top 50 rankings for the first time on Aug. 14, after advancing to the round of 16 at the Rogers Cup. Then he reached the quarterfinals at the Winston-Salem Open in North Carolina. 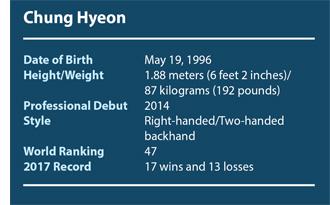 Along the way, he’s also received media attention for a string of surprise wins against top players. Starting at the Barcelona Open in April, Chung defeated Alexander Zverev Jr. of Germany, ranked 20th. At the Bavarian International Tennis Championships in May, he beat Gael Monfils of France, ranked 16th. And at the Rogers Cup, he defeated David Goffin of the United States, ranked 13th, the highest ranked player Chung has ever defeated.

In the round of 64, Chung will face John Isner of the United States, ranked 15th, who is famous for his strong serves, recording about 17.5 serve aces per game. It won’t be easy for Chung. Isner’s best finish in a major tournament was advancing to the 2011 U.S. Open quarterfinals, and Isner has already defeated Chung in April, during the quarterfinals of the Fayex Sarofim & Co. U.S. Men’s Clay Court Championship in Houston, Texas. The match will be aired live on JTBC3 FOXSPORTS channel on Thursday.