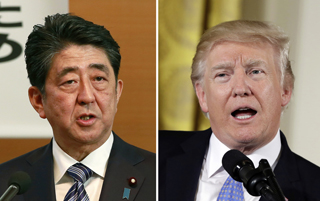 Washington, D.C. is not just the political home to the world’s most powerful nation, but also the center of the global economy. It hosts the headquarters of the International Monetary Fund (IMF) and World Bank. The two lenders differ slightly. The IMF acts more as a public entity. It recruits brainpower from all across the world. Its staff is ensured job security until the retirement age of 65. Policies are determined mostly with a mid- to long-term perspective.

Japan chose lifetime commitment in coupling with the United States. U.S. President Donald Trump called up Japanese Prime Minister Shinzo Abe while on a vacation on Aug. 14 to talk about the brewing tensions from North Korea’s missile threat. It was their ninth call this year, having built amicability to the extent of addressing each other by the first name. Trump informed Abe of his administration’s plan on announcing an executive order in the following week of enforcing new North Korea-related sanctions. They are designed to target individuals and enterprises in China and Russia it suspects of helping Pyongyang’s weapons program. Trump asked for a synchronized action from Tokyo.

Abe did not answer immediately. His finance ministry was cautious. Japan nevertheless announced new sanctions related to North Korea a few days later. Abe, however, is not the all-obeying type. Sensing a distance between the defense ministers of the two countries, he popped into their dinner meeting in a show of moral support for his minister. While appearing to go along with Trump’s plan, Abe dropped Russian companies off his sanctions list in fear of upsetting Moscow ahead of his visit to Russia next month.

The cozy ties between Trump and Abe don’t necessarily serve Seoul. Trump did not disguise the fact that he was losing patience with Seoul for its inaction while the United States and Japan mounted unilateral sanctions on North Korea following missile provocations in March and June. Abe reportedly relayed his displeasure in a phone conversation with South Korean President Moon Jae-in on Aug. 25.

Reading between the lines is important in relationships between states. Washington says it will seek a diplomatic solution to North Korea’s weapons program while keeping a military option in its back pocket. Seoul has taken Washington’s word for that. But it is naive to believe Washington has chucked aside the military option and is readying to enter talks with Pyongyang. What it means by a “diplomatic solution” is to seek more powerful international pressure.

Abe has understood Washington correctly. His government withheld 330 billion won ($293.3 million) in aid to Egypt in sync with Washington because the Middle East state has maintained friendly relations with North Korea. To Washington, Seoul’s noncompliance could be understood as defiance of the traditional alliance. It may have doubts about Seoul as a cohabitation partner, let alone a partner for life. Moreover, the strong actions and fiery warnings have failed to humble Pyongyang.

There is also speculation that Washington could strike a deal with Beijing to use its influence over Pyongyang with the promise to pull U.S. troops out of the Korean Peninsula. Seoul must win the full trust of Washington. We do not have the luxury to choose between cohabitation and marriage.