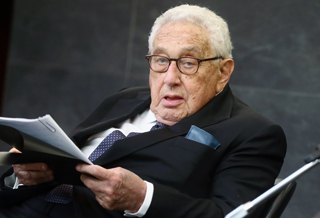 In the 70 years after World War II, the world order has shifted from a U.S.-Soviet rivalry to détente between the United States, China and Russia, and now, a Sino-U.S. rivalry. The architect of this great change was Henry Kissinger, the secretary of state under President Richard Nixon. The 94-year-old strategist is still active and consults with the American, Chinese and Russian presidents.

In a Wall Street Journal op-ed on Aug. 14, Kissinger wrote, “Since denuclearization requires sustained cooperation, it cannot be achieved by economic pressure. So which parties should negotiate, and over what? An understanding between Washington and Beijing is the essential prerequisite for the denuclearization of Korea.”

He argued that China would have a stake in the political evolution of North Korea after denuclearization, “whether it be a two-state solution or unification.” In his thinking, North Korea is the problem itself, not the main agent resolving the problem, and he offered his own solution. There are three characteristics to it.

First, the United States and China are the main players, not North Korea. A peace agreement between Washington and Pyongyang could lead to suspicion from Beijing. Hence, it is not desirable.

Second, the goal is complete and immediate removal of North Korea’s nuclear program. There is no middle stage like “freezing the program at its current state” as South Korean President Moon Jae-in has advocated. If the program is frozen at its current stage, North Korea’s nuclear arsenal will, in practice, be tolerated, and South Korea, Japan and Vietnam will inevitably pursue nuclear armament one after another.

Third, the price is withdrawal of U.S. forces from South Korea. The political order in East Asia set up after denuclearization should reflect China’s position, and it could include withdrawal of American troops. Kissinger did not explicitly mention it in his column, but about 15 days earlier, The New York Times reported that he had suggested to U.S. Secretary of State Rex Tillerson that the United States and China arrange an agreement to withdraw troops from the Korean Peninsula after a North Korean collapse.

In more direct language, Kissinger’s plan is for the United States to withdraw troops if China removes Kim Jong-un from North Korea. As Washington is fretting over the possibility of a nuclear-tipped intercontinental ballistic missile hitting the U.S. mainland, Kissinger’s plan may be the most appropriate goal it can share with China. From Beijing’s position, it has no reason to turn down collapse of the North Korean regime if it can satisfyingly exercise geopolitical influence on the Korean Peninsula without an American presence.

The South Korean government needs to be careful and assume that Kissinger’s plan is ripening between the United States and China. While the Blue House and Ministry of Foreign Affairs are carefully watching for U.S.-North talks, they could be a bluff from Washington. We need to shift to realistic options. The situation could suddenly change, and the 27,000 American troops stationed in South Korea could leave during President Moon’s term. The government needs to be fully prepared.

Kissinger’s views are extremely centered on powerful nations and are often uncomfortable and ominous. Nevertheless, we cannot neglect his understanding of reality and insight. A weak country might not be able to defeat a strong one, but needs to use it.