2018 budget is heavy on welfare

2018 budget is heavy on welfare 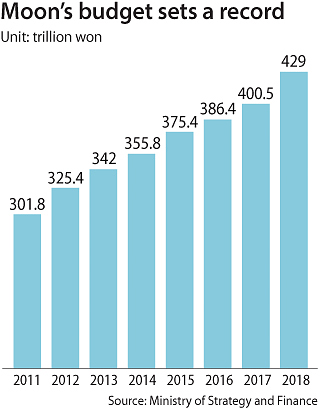 President Moon Jae-in’s administration has proposed a budget for 2018 worth 429 trillion won ($382 billion), an increase of 7.1 percent from this year’s budget and the largest year-on-year rise since the global financial crisis, a clear sign that the new government elected just three months ago is not holding back on spending to achieve its goals of expanding income and welfare.

Not only is the budget increase more than this year’s 3.7 percent under Moon’s conservative predecessor, Park Geun-hye, it’s the largest since 2009, when the country was recovering from the global financial meltdown and the government raised spending by 10.7 percent.

“Although the momentum of economic recovery is still there in the second half of the year, because of structural problems like the worsening [wage] gap, the livelihoods of low-income people have not improved,” Finance Minister Kim Dong-yeon said Tuesday. “There is a need for fiscal policy to take on a more aggressive role and lead the way.”

The minister said there needed to be a paradigm shift in how Korea tackles structural problems in its society and economy to overcome challenges like low economic growth and income disparity, and stressed that in order to realize wage-led growth in the next five years, the government will increase its budget faster than economic growth.

Keeping with the theme, the budget next year will largely focus on creating jobs and providing welfare. About 34 percent of the budget, encompassing 146.2 trillion won, has been set aside for health, welfare and labor spending. It represents a 12.9 percent increase, the largest among the government’s budget items.

Spending on jobs alone will be 19.2 trillion won, up 12.4 percent. This includes 400 billion won that will be used to hire 15,000 employees of the central government, which includes positions related to public safety. The government has set a goal of hiring 174,000 public servants in the next five years, with plans to hire 3,500 police officers this year and 6,800 workers in fields related to public safety, including quarantine and border patrol.

The government has also set aside a significant budget to support job creation in the private sector, including financial aid for employees at small and medium-sized enterprises. Specifically, 3 trillion won has been allocated to help SMEs that might be affected by the higher minimum wage set to go in effect next year.

The second-biggest increase is in education, where the government has raised spending by 11.7 percent to 64.1 trillion won, which includes 1.2 trillion won to fund day care centers and preschools.

Significant reductions have been made in social overhead capital, the cost of building and maintaining public infrastructure. The budget has been slashed 20 percent to 17.7 trillion won, and although the budget has seen cuts in recent years, including a 6.6 percent reduction this year and 4.5 percent last year, next year’s will be the steepest.

The cuts are part of President Moon’s promise to efficiently allocate the budget for more useful purposes. Finance Minister Kim said the government would utilize money saved from social overhead capital on education and welfare.

The government expects to continue expanding its budget for the next five years while President Moon is in power. His administration has specifically targeted an annual average increase of 5.8 percent through 2021, which will translate to government spending exceeding 500 trillion won during the last year of Moon’s term.

The big question is how the government will secure the finances to meet the target. The administration believes it’s doable by trimming unnecessary expenses and collecting more taxes. The government expects income of 447.1 trillion won next year, an increase of 7.9 percent from this year, and most of it will be tax revenue. The government believes tax collection will increase 10.7 percent next year to 268.2 trillion won.

However, this estimation is derived from the assumption that the Korean economy will fare well enough to allow the government to collect more taxes from conglomerates and high-income earners. In particular, the government expects corporate tax collection to rise 10.2 percent and income tax collection to grow 4.9 percent. That view might be overly optimistic, especially after the Bank of Korea issued a report Monday raising the possibility that the Korean economy might be losing steam in the second half from geopolitical tensions with North Korea and worsening trade relations with China and the United States.

Some critics say the government ought to increase funding for research and development instead of focusing on welfare. They believe that growth derived from higher income is limited and supporting companies in creating new industries and technologies will improve productivity.