Elected on a wave of popular discontent with collusion between politicians and the business community, President Moon Jae-in spent his first three months in office reorienting the country’s economic vision and reversing the previous conservative governments’ priorities and legacy.

The liberal president said his focal point is the people - not the rich and big companies.

To achieve a so-called people-centered economy, Moon came up with the concept of income-led growth, which will attempt to spur economic growth through boosts in households’ incomes and the demand generated by greater spending power.

That was a clear departure from the two former conservative presidents’ reliance on “trickle-down economics.” They believed the government should deregulate the market and help the rich and particularly big corporations so that their income and wealth would trickle down and increase the general prosperity. 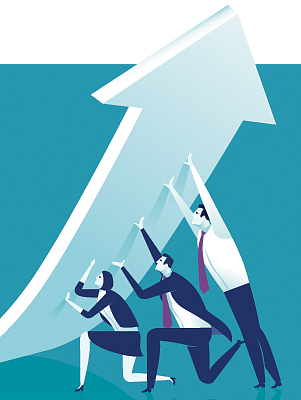 When a big economic policy address was expected during the Lee Myung-bak and Park Geun-hye administrations, shares of construction companies shot up on the assumption that the government might unveil deregulations in favor of the real estate market.

The prices of major construction stocks, for instance, rose 15 percent in July 2014, ahead of a planned announcement by then-Finance Minister Choi Kyung-hwan. In August, he loosened loan-to-value and debt-to-income limits for mortgages.

The last two administrations believed that a real estate boom would bolster economic activity along with facilities and construction investment.

With Moon in the Blue House, the tide has shifted. The former human rights lawyer emphasizes redistribution of wealth and leveling the playing field between small and big corporate players.

Most economic policies - concerning debt, tax reform, conglomerates and fiscal stimulus - have been overturned with the aim of more equitable growth.

So drastic the change is that pundits are talking about a “paradigm shift” for the Korean economy.

While some economists believe Moon’s approach is timely amid rising income inequality, others claim that it could stunt Korea’s growth prospects and stifle corporate innovation.

A people-centered economy, financial inclusion, and income-led growth - these are the phrases that often appear in the policies proposed by the Moon administration.

A report by the International Monetary Fund noted that Korea was once one of the Asian “miracle” economies where “sustained rapid growth was accompanied by equitable income distributions.”

Since the early 1990s, the country has “witnessed rising income inequality, a break from its own remarkable past of equitable growth,” according to the IMF report entitled “Sharing the Growth Dividend: Analysis of Inequality in Asia.”

The increasing gap between rich and poor has dented many Koreans’ hopes of moving up the social ladder.

In a survey conducted in April, 83.4 percent of the respondents said their chances of climbing the social ladder are low.

Besides income inequalities, corporations have contributed less to job creation and investment since the late 1990s despite generally business-friendly policies.

To solve such problems, key aides of Moon proposed the idea of income-led growth.

Hong Jang-pyo, chief economic adviser of the Moon government and a former economics professor at Pukyung National University, is known for providing a theoretical basis for the concept.

In a paper published in 2016, Hong argued that an increase in wages would lead to expansion of demand, which translates into an increase in corporate revenue and investment.

Hong Jun-pyo, an economist at Hyundai Research Institute, says those kind of policies will help mitigate the gap between the rich and poor and redistribute wealth.

“Over the years, Korea experienced rapid growth,” he said. “But we also witnessed rising inequality.

“The tax reforms and job creation moves that the government announced will help reduce the inequality and people’s concerns about social mobility.”

Others doubt the basic tenets of what a few are calling J-nomics (the J refers to the president’s name Jae-in).

Kang Myung-hun, an economics professor at Dankook University, said the theory is not yet tested as a viable economic policy in the real world.

“There is little or no firm evidence that the increase of household income can directly translate into increased consumption,” the professor said in a phone interview.

“When income rises, people tend to save more. On the corporate side, however, the increases in salaries become a cost - a burden. Therefore, it could result in a reduction of employment and investment, which would contract overall economic output,” said the professor, who also served as a member of the monetary policy committee at the Bank of Korea.

A related question is whether smaller companies can handle the government’s moves to boost wages.

In Korea, more than 80 percent of workers are either self-employed or work for small and medium sized companies, though the country’s economy is dominated by the large, family-run conglomerates.

Many mom-and-pop stores and small companies will be incapable of increasing salaries in a meaningful way because it would wipe out their slim profits.

“But a handful of big companies account for most of the increased profitability. So, bigger companies might have room for more investment and employment. But their impact would not be as great as smaller companies because only a fraction of the workforce belongs to the conglomerates.”

In his report, Lee noted that Moon’s grand fiscal stimulus package that is expected to require some 178 trillion won ($158.4 billion) of the budget might put a financial burden on the country.