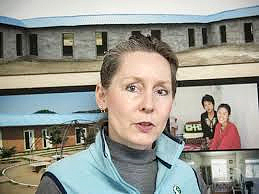 Heidi Linton, mother of three grown sons, runs an organization named “Christian Friends of Korea” in a warehouse in Black Mountain, North Carolina, with her husband, Handy. The organization was founded in 1995. Eugene Bell, who was a missionary to Joseon, was the great-grandfather of her husband. Her uncle-in-law, Dwight Linton, who was born in Korea, visited North Korea with Billy Graham in 1992 and 1994 and worked as an interpreter in meetings with then North Korean leader Kim Il Sung.

Rather than conversion or missionary work, Linton chose to offer relief work for patients and children in North Korea. Every year, her organization helps over 30 facilities, including tuberculosis and hepatitis clinics and nursing homes in the North. Last year’s activity report shows that over $1 million was used for the relief work, including $310,000 for the training of medical staff and research center support to eradicate tuberculosis, $228,000 for renovation of hospitals and clinics, $112,100 for wells and water purification, $33,750 for patient meals and $10,000 for farming tractors.

This year, she led a volunteer group for the humanitarian projects and visited North Korea in March and June. This month, she again went to the North, leading a team of 12, including eight Americans, three Norwegians and one Australian. This may be Linton’s last visit to the North.

From Sept. 1, the U.S. Department of State’s travel ban takes effect, and a U.S. citizen who visits North Korea will have their passport revoked and be subject to felony charges. Aside from the travel ban, the UN Security Council’s sanctions and Department of Treasury’s restriction of international financial transactions with North Korea prevented Linton from sending funds to purchase bicycles for North Korean medical workers in the rural areas.

The small humanitarian groups are not the only ones hit by the ban. Pyongyang University of Science and Technology is jointly supported by South Korea and the United States and is the only university in North Korea with a Western curriculum. Its operation is to be affected from the second semester in September. More than 70 faculty members, including co-president Chun Yu-taek, are U.S. citizens and will have to leave by the end of August due to the travel ban. The North Korean regime is responsible for the travel ban, as it detained American college student and tourist Otto Warmbier, who fell into a coma and died after 18 months in captivity. Also, three Korean-Americans, including pastor Kim Dong-chul, are still detained.

As the travel ban becomes effective this week, Vice Foreign Minister Lim Sung-nam is meeting with Deputy Secretary of State John Sullivan to seek a peaceful solution to the issue, but North Korea’s behavior will determine whether the United States pursues talks or more pressure.