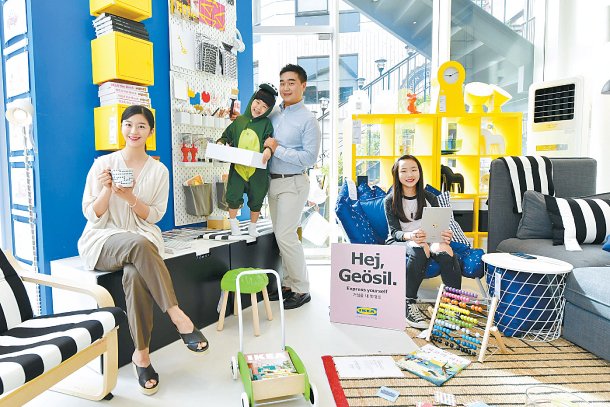 Ikea Korea will open its second outlet in Goyang, Gyeonggi, on Oct. 19, three years after it first opened its Korean store in Gwangmyeong, Gyeonggi.

It will open four more stores by 2020 and is hoping to launch an online shop for Korean customers within the year as well.

The local unit of the Swedish furniture giant announced Tuesday that its revenue in the fiscal year of 2017 jumped by six percent year on year, recording 365 billion won ($324 million).

“Enhancing accessibility is the most important factor when opening a new outlet,” said Andre Schmidtgall, retail manager of Ikea Korea, on Tuesday during a press event in western Seoul. “We are expecting the new Goyang outlet will make shopping at Ikea more accessible to more people and we hope the new store will make shopping at Gwangmyeong easier,” he added.

Ikea Korea also announced “Express Yourself, My Living Room, My Way,” as the main theme of its lineup and marketing strategy for 2018, which has its emphasis on the living room. According to the furniture company, the living room was the most preferred space among Koreans but less than half of 1,000 respondents to their survey - aged between 20 and 55 - said they were satisfied with theirs.

When asked about expected competition with Shinsegae’s mega shopping mall Starfield, which recently opened a branch in Goyang, Schmidtgall said that he doesn’t think the two outlets are in competition.