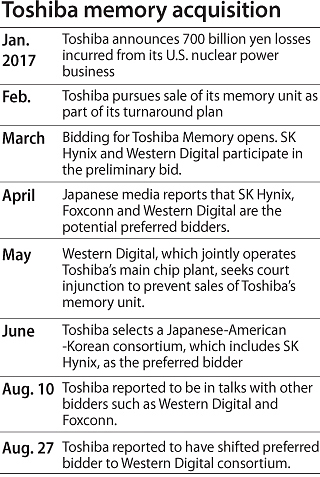 The chance of SK Hynix participating in the acquisition of Toshiba’s memory chip unit are becoming increasingly slim as a consortium led by Western Digital has emerged as the new frontrunner to finalize the deal.

According to the Japan Times on Tuesday, Toshiba and Western Digital reached a “broad accord” on the sale of the Japanese conglomerate’s chip unit. Although the final announcement is yet to be made by the Japanese conglomerate, industry watchers expect it is likely that Toshiba will choose the Western Digital-led consortium by the end of this month as the U.S. firm agreed to drop its legal action against the sale of the chip unit in return for the deal.

The final announcement is likely to be made on Thursday when Toshiba has a scheduled board meeting.

While the news is a blow for Korean chipmaker SK Hynix, which was close to taking part in the acquisition of Toshiba Memory, industry analysts say it won’t be a major issue for the Korean semiconductor manufacturer.

“Western Digital and Toshiba combine to account for about 35 percent of the global NAND market, similar to that of Samsung Electronics,” said Claire Kim, a research fellow from Daishin Securities. “But the reduced chance of acquiring the Japanese semiconductor manufacturer will not severely hurt [SK Hynix’s] share price.”

According to market tracker IHS Markit on Tuesday the top runner Samsung Electronics accounts for 38.3 percent of the NAND flash market followed by Western Digital with 15.8 percent and Toshiba at 16.1 percent. SK Hynix ranks fifth with 10.6 percent.

“Compared to the scenario of Toshiba teaming up with a Chinese consortium, it means less uncertainty and threats for Korean chipmakers,” a spokesperson from SK Hynix said. “As the market has already experienced Western Digital teaming up with Toshiba by acquiring SanDisk, the new deal won’t bring much difference in the landscape of the global memory market.”

Some media reported on Tuesday that SK Hynix is seeking to file legal action against Toshiba for shifting its preferred bidder to the Western Digital-led consortium, but the Korean chipmaker denied the speculation, saying selection of a preferred bidder was “not legally binding.”

The talks between Toshiba and the consortium comprising Western Digital, investment fund Kohlberg Kravis Roberts, the public-private Innovation Network Corp. of Japan and the state-backed Development Bank of Japan have been making rapid progress as the U.S. firm, Toshiba’s joint venture partner for its chip business, agreed to drop its legal action filed against the sales process in return for the deal.

The U.S. company had filed a request for arbitration to block the sale of Toshiba’s memory unit to a third party without its consent, citing a breach of joint-venture agreements. But the company told Toshiba earlier this month that it could ditch the arbitration request if a deal is reached.

The new preferred bidder is expected to buy the chip unit at about 2 trillion yen ($18.4 billion), which is similar to the price offered by the consortium that included SK Hynix.

Western Digital is likely to invest 150 billion yen in convertible bonds, about 16 percent of the voting rights when all bonds are converted to ordinary shares, and its stake will be limited to a third of voting rights.

The U.S. firm will not seek management roles on the memory unit’s board. The moves are believed to be measures intended to avoid a possible monopoly controversy.

A concern for Western Digital is that the deal will be subject to regulatory approval from antitrust authorities, which could push finalization of the sale past March 2018, the deadline set by Toshiba creditors.