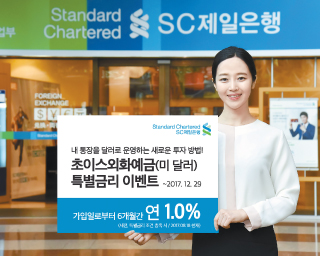 Standard Chartered Korea is running a promotion for its “Choice Foreign Currency Deposit Account” through the end of December. [STANDARD CHARTERED KOREA]

The U.S. Federal Reserve has already raised interest rates twice this year, in March and June, and chances are high that there will be another increase later this year. Since interest rate hikes often reflect economic recovery, experts are expecting a stronger dollar in the long run.

If you are interested in taking advantage of higher rates and investing in the U.S. dollar, foreign currency deposit accounts are the easiest way to start. Dollar deposits worth up to 50 million won ($45,000) are subject to depositor protection, and taxes are imposed only on interest income, not profit from foreign exchange rates.

However, this promotion is subject to interest rate fluctuations and early termination.

SC Korea’s Choice Foreign Currency Deposit Account also provides a one-time exemption of overseas remittance fees for clients who maintain an average $5,000 in their account for the past month.

Clients with more than $10,000 in the past two months can choose between waiving remittance fees or foreign cash withdrawal.

An additional promotion offers customers an exchange rate that is 90 percent of the best rate on money that is exchanged and deposited in the account for the first time.

Customers will get the same rate every time they do foreign currency exchanges through SC Korea’s mobile banking.

“We decided to do this promotion because a lot of investors have shown interest in foreign currency deposits, since prospects for the dollar are strong,” an SC Korea official said. “Considering the fact that the interest rates of foreign currency deposits are usually around 0.01 to 0.05 percent annually, our Choice Foreign Currency Deposit Account with its special 1 percent interest rate is attractive for investors.”