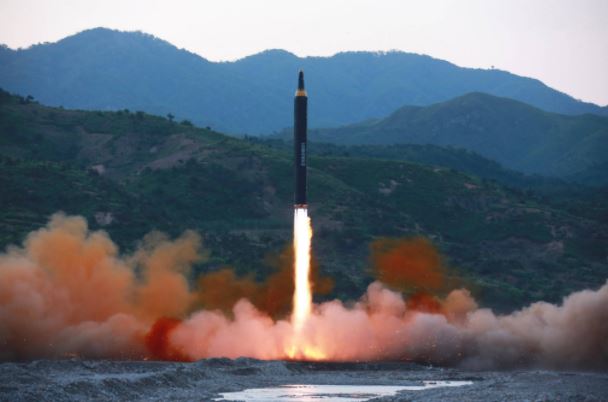 North Korea fired another ballistic missile at around 5:57 a.m. from Sunan in Pyongyang, the capital, that flew 2,700 kilometers (1,678 miles) over Japan before landing in the Pacific.

The North’s latest missile launch prompted Japanese authorities to warn its citizens to take cover in the northeastern region as the missile apparently flew over Japanese airspace before landing in the Pacific to the east of Hokkaido.

South Korea’s Joint Chiefs of Staff said the missile reached an altitude of 550 kilometers and flew 2,700 kilometers, an indication that the North put the missile on a normal firing angle, in a departure from past instances where it put a missile on a horizontal angle to reduce the flying distance.

The Blue House has convened a National Security Council meeting at 7 a.m. presided over by NSC Chairman Chung Eui-yong.

The U.S. has yet to issue an official announcement on the North’s latest missile as of 7:20 a.m. Seoul time.

The military is analyzing the trajectory and type of the missile.