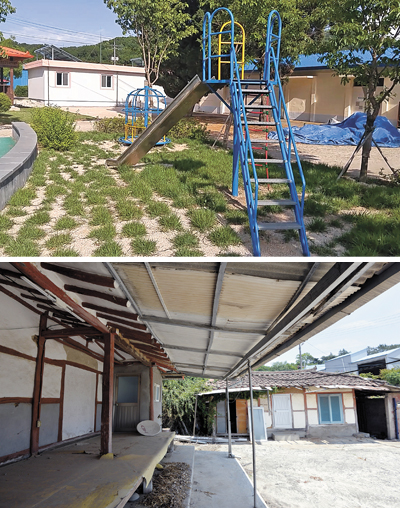 Above: A playground in Cheorwon County, Gangwon, where older adults make up most of the population, lies empty. Below: An abandoned house in Seocheon County, South Chungcheong, is one of the many in the region after the elderly owners die. [KIM SUNG-TAE]

Within the next three decades, about 40 percent of all Korean cities and towns will cease to exist because its residents may have died out, according to data from the Korea Employment Information Service (KEIS).

Yugok, a town in Cheorwon, Gangwon, is likely one of those places.

“Most of the residents here are over 65,” said Ahn Seok-ho, the 76-year-old head of the town. “Here, you have to be in your 70s or 80s to be called grandma or grandpa - if there are kids to call them these names, that is. There are only three kids in the town.”

Two of these children are living with their Korean father - their mother, a foreign national, left them. Ahn said the one and only elementary school in town closed 20 years ago for lack of students.

“This place is filled with old people,” said Jang Yeong-ja, a 74-year-old resident. “People who live alone are afraid of dying here.”

Seven of the town’s 60 houses have been left abandoned after their residents died. Six residents died within the past four years. Ahn said most of the work in the fields is being done by foreign laborers.

“Nine years ago, I could hear babies crying at night,” said Kim Gyung-ryul, who is 87 years old and the oldest resident in town. “Now there is only dead silence. People keep dying every year. I’m afraid the whole town will disappear at this rate.”

People who are aged over 65 make up 59.3 percent of the population in Geunbuk-myeon, which includes the towns of Yugok, Geumgok, Baekdeok and Yulmok, the highest ratio among 3,482 towns in Korea, according to Statistics Korea’s 2015 Population and Housing Census. The statistics were collected based on resident registration.

“Last year, one resident was stung by a bee and he died in the ambulance on the way to the nearest hospital, because the closest one is located some 20 kilometers [12 miles] away,” said Gu Su-hwan, the 74-year-old head of Eungok in Seocheon County, South Chungcheong, where people over 65 make up 60 percent of the town.

The number of homes abandoned after older residents’ deaths also increased by 47 percent, from some 720,000 homes in 2005 to 1.06 million in 2015, according to Statistics Korea.

When the reporter visited in June, it was not hard to spot abandoned houses in the village of Munsan, Seocheon, South Chungcheong. People over 65 make up 49.2 percent of residents in Munsan. Many of these houses had broken windows and doors, and were filled with spider webs, dust and trash.

Some cities also face difficulties due to their rapidly aging populations.

People over 65 make up 23.8 percent of the population of Daebong 2-dong in Jung District, Daegu, which experts say is quite a high ratio. Daebong 2-dong has more than 10 abandoned homes whose older owners passed away.

“There are many older people here who live in poor conditions,” said Kim Jong-ho, head of the community center of Daebong 2-dong. “But we can’t seem to find and reach them in time.”

Some local governments in North Jeolla began asking mail carriers to check on older adults living alone, and some in North Gyeongsang are implementing a system of connecting volunteer groups with elderly community centers.

“At this rate of aging population and low birthrate, Korea is going to follow in the footsteps of Japan and will continue to lose towns in the countryside,” said Lee Sang-ho, a researcher at KEIS. “The central government needs to dole out measures that will help local governments select so-called central towns where welfare and other support for elderly residents will spread out to smaller towns.”