Hella Verona to sign Lee Seung-woo of Barcelona B

Hella Verona to sign Lee Seung-woo of Barcelona B

Lee Seung-woo, the last Korean footballer remaining in FC Barcelona’s B side, has reached a deal with Hella Verona to play with the top-division Italian club for four years. 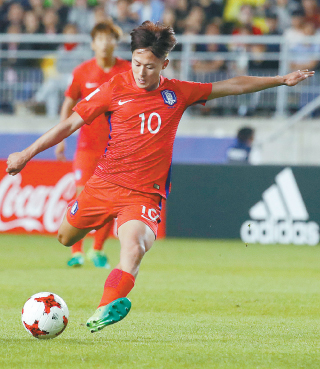 Lee Seung-woo attempts a goal during Korea’s match against England in the U-20 World Cup in May. [YONHAP]

Verona has demonstrated high interest in the 19-year-old prodigy since his performance for Team Korea in the U-20 World Cup this year, and agreed to pay Barcelona a 1.5 million euro ($1.8 million) transfer fee, with the Spanish outfit retaining a buyback option for two years.

Lee is the last of three Korean players to leave Barcelona B, following the departures of Jang Gyeol-hee to Asteras Tripoli FC in July and Paik Seung-ho to Girona FC last week. Among them, Lee is the only one to have successfully transferred to a first-division club in the European league.

After finishing as the top scorer in the 2010 Danone Nations Cup, one of the world’s most prestigious youth football tournaments, Lee, at age 12, caught the attention of Barcelona and earned a spot in the club’s junior training program. Lee has spent a majority of his young football career with Barcelona and previously expressed strong determination to remain there, with the goal of playing alongside Lionel Messi. His bright prospects even earned him the nickname “Korean Messi.”

Lee’s contract propelled him to Barcelona B when he turned 19, but by then, the team had already filled its non-European quota of two. Figuring that the rules would not guarantee him enough playing time, Lee made up his mind to find another team that would give him more opportunities on the pitch.

His new club Verona has a long history dating back to 1903, though they have only won the top-tier Serie A championships once, during the 1984-85 season. Afterward, the team has oscillated between the Serie A and Serie B divisions.

Most recently, they were promoted to Serie A after finishing second in Serie B last season. Verona is currently ranked 14th out of 20 in the league with one tie and one loss from two matches so far this season. Lee is expected to fill in for Antonio Cassano, a 35-year-old forward who announced his surprise retirement from football before the start of the Italian season in July.

With Lee’s transfer, he becomes the second Korean footballer after Ahn Jung-hwan to play in Serie A.