Kim Jae-hwan of the Doosan Bears, third from left, appeals to the umpire after the initial decision was called an out. [YONHAP]

What could have been a great game between two of the hottest teams in the second half of the season ended with another judgment controversy in the Korea Baseball Organization (KBO) on Tuesday. Along with the recent scandal involving KBO clubs allegedly giving money to an umpire, the league is losing more and more credibility with its fans.

As expected, the Doosan Bears’ game against the Lotte Giants at Jamsil Baseball Stadium in Southern Seoul was tight until the bottom of the seventh. With the game tied at 5-5 and the bases loaded Min Byung-hun of the Bears hit a ground ball to the Giants’ shortstop, Moon Kyu-hyun, who threw the ball to catcher Kang Min-ho. Having forced out the Bears Moon threw the ball to third base, taking out Kim Jae-hwan with a double play.

The third base umpire called Kim Jae-hwan as out, as he thought that the Giants’ Kim Dong-han had caught the ball before the runner reached the base. Kim Jae-hwan appealed the decision, insisting that he reached the base first, and the Bears’ third base coach also challenged the umpire. Immediately, without any consultation and without consulting the video review, the umpire overturned his own decision and called a safe. 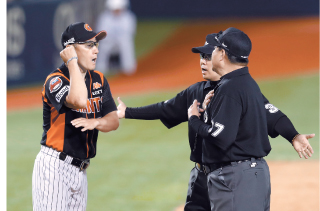 Cho Won-woo, manager of the Lotte Giants, appeals to the umpires during the game against the Doosan Bears at Jamsil Baseball Stadium in southern Seoul on Tuesday. [YONHAP]

Cho Won-woo, the manager of the Giants, walked on to the field to confirm the umpire’s decision, as it was still unclear what the umpire was saying. When the umpire said, “it was my mistake,” Cho requested a video review. His request was denied, however, as 30 seconds had passed.

From the time Cho got up to the mound, the game had to be suspended for eight minutes. Normally, all appeals by a manager must be made within five minutes. The incident, as well as the lengthy pause, took away the Giants’ momentum, and they went on to lose the game 7-5.

This is the second time this season the Giants have been involved in a controversial call by an umpire. During their game against the Samsung Lions at Ulsan Munsu Baseball Stadium on July 20, what should have been a home run for Son Ah-seop was called as a two-base hit after a video review official didn’t understand the local stadium rules.

This season, the KBO’s first season with the Video Review Center, there have been a number of bad calls. Not only does this show a lack of technological equipment, the continuous mistakes have also raised questions about officials apparent lack of knowledge.

Aside from questionable calls, fans also felt let down after four clubs - the Bears, the Kia Tigers, the Samsung Lions and the Nexen Heroes - became involved in a money scandal surrounding a former umpire, surnamed Choi.

It’s been more than three years since the alleged payments took place, but it was brought to light only recently as an arrest warrant was issued for Choi on Wednesday. Lending and borrowing money is prohibited in the KBO, and it has been revealed that Choi borrowed money from four different clubs. Although it is still unclear what, if anything, Choi did in exchange for these payments, baseball fans are increasingly concerned about corruption in the league.