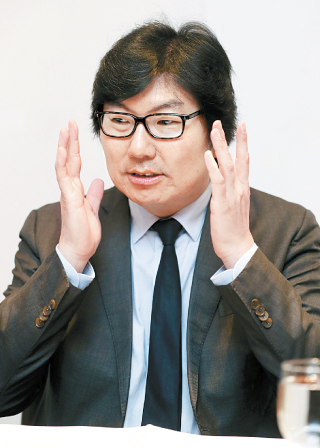 Korea was never on the travel wish list of French politician Jean-Vincent Place, President of the French Ecologist Party. As a Korean adoptee, who was raised by a French couple in France since the age of seven, he intentionally did not have any interest in Korea, the country that he used to believe had abandoned him.

But Place’s hard-line stance on Korea began to soften after getting to know Park Heung-shin, Korea’s former ambassador to France. And Place developed a deeper interest in the country after visiting Korea for the first time seven years ago, during which he met a number of welcoming people, including Choi Jung-hwa, President of Corea Image Communication Institution (CICI), a nonprofit that promotes Korean culture overseas.

“Through my visit to Korea, I overcame the resentment I had towards the country, and eventually got to know more about the country I was born in. I’m glad to have discovered the roots of my origin,” Place told the Korea JoongAng Daily in an interview Tuesday.

Since then, Place has visited Korea numerous times, and he returned this year after he was invited to the Culture Communication Forum (CCF), an annual event hosted by CICI.

Q.You have said that you admire the mix between modernity and preservation of ancestral traditions in Korea. Where have you seen this best exemplified?

A. Last year, during the Year of Korea-France Mutual Exchange, I attended numerous events in Paris. I was able to enjoy Korean traditional music performance and was also able to read many books on Korean history and geography. [I could also experience the tradition of Korea] when I visited temples, and was especially impressed with Jogye Temple [in Seoul]. I was also astounded by the well-preserved ancient palaces and fortresses. I found preserving the tradition even to this day impressive, but what I found even more impressive was the co-existence of modernity in Korea. Technological development, innovativeness and digital advancement in Korea set a complementary contrast with its ancestral tradition.

You visited numerous places like the Korea Furniture Museum and the Hyundai Card Music Library through CCF. Which place did you like the most?

Though I couldn’t join the event from the start, I particularly enjoyed Hyundai Card Music Library. The place seemed like a library preserved with old LPs that also functioned as a venue for concerts, staging modern pop stars. It was like a place of creation and meeting that also reflects the modernity of Korean culture.

Young people in France are familiar with Korea thanks to Korean culture like K-pop and K-dramas. But the older generation’s understanding of Korea does not seem to be as deep. How do you think Korea can promote its culture to people of different ages in France?

I think Korea is already doing well promoting its culture abroad - both by the government and the private sector. Lots of excellent products from Korean conglomerates like Samsung, Hyundai, Kia and Daewoo are exported to France.

Along with that, an increasing number of Korean restaurants are opening up in France, and their high-quality cuisine is surprising French people.

These elements combined contribute in spreading a positive image of Korean culture in France.

What are some of the most popular Korean dishes in France? Why do you think that French are attracted to Korean cuisine?

A few of the most popular Korean dishes in France are bibimbap, [rice mixed with vegetables], bulgogi, [Korean barbecue], and the banchan culture. [Banchan refers to the side dishes that usually come for free when served with rice and soup]. It is difficult to find common ground between Korean and French cuisine cultures. The only common ground would be that the two both pursue making high-quality food using the finest ingredients. But I believe the difference is what French people find attractive about Korean cuisine, which are perceived to be healthy, without too much oil and without being too salty or sweet.

Was there any time you found Korean culture disappointing?

To be honest, no. Some say Koreans work too much, but I don’t see why that is a problem. I have felt very comfortable during my visits and was impressed with the culture in Korea. I hope to see advancement in the relationship between Korea and France.