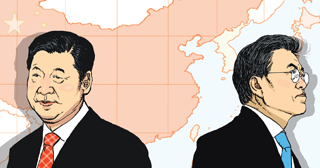 China has long maintained a double standard for the two Koreas, and amid this, South Korea has been courting China’s favor with vague anticipation. The miscalculated courtship and closeness that Korea thought it had with China has resulted in a profound sense of solemn loss and a heavy cost.

After President Park Geun-hye’s inauguration, China began a policy of appeasement toward Korea. Park was complacent when she received the highest welcome during her state visit to China in 2015 and thought that if Korea could build credibility, it could avoid disaster even if things go wrong in the future. She pushed for entry into the Asia Infrastructure Investment Bank and a free trade deal with China, and even stood atop Tiananmen alongside Chinese President Xi Jinping during a military parade celebrating the end of World War II. It was the high point of the Seoul-Beijing relationship.

However, after the decision to host the controversial U.S. missile defense system known as Thaad in Korea, Park’s credibility crumbled. President Xi retaliated against the political issue with trade restrictions despite criticism from the international community. Traditionally, China has strictly followed a rule to defend its own territory, people and sovereignty. Its method is based on power dynamics and a self-centered calculation of interests. When it looks at Korea, China sees the shadow of the United States.

And because China’s domestic policies and foreign strategy are closely linked, Beijing refuses to abide by the international order established by the United States and seeks the diplomacy of identity. As acts of cooperation and conflict repeat in a vicious cycle between the United States and China, Beijing is completing a new calculation of national interests over the Korean Peninsula. In the past quarter century, U.S.-China relations and Korea-China relations have changed in a big way as China’s national strength has grown rapidly.

China has committed the mistake of damaging a well-earned relationship with Korea through emotional unilateralism, and that has left an ineffaceable wound on Koreans. We feel helpless and think that the Korea-China relationship may be trapped by the innate limits of core values, with a distance that cannot be reduced. Despite many efforts so far, Korea hasn’t been able to open a secret communications channel with key powers in China.

Especially on the economic front, both countries are World Trade Organization members and a free trade agreement is in effect, but the future of Korean companies in China is unstable because they have practically been taken hostage. They cannot even dare to ask for prevention of further trouble. The Korean government needs to resolve this issue to function as a proper nation.

The controversy over Thaad has become an important opportunity for Korea to learn about China. What do we mean to China and vice versa? In short, a relationship with China is Korea’s destiny.

Considering our history and today’s reality, China has tremendous influence over Korea’s survival and reunification. Keeping a distance from China would mean losing opportunities, and getting too close might result in subjugation. As a mid-level nation, Korea is a compass for China’s future and maintains a highly supplementary relationship with China. Therefore, China needs to abandon the traditional sense of suzerainty and respect Korea. As a world leader, China should display tolerance and dignity, modify its style to international standards and value friendly relationships with its neighbors.

And unless their perspectives about the world converge, the two countries will continue to have different dreams. The relationship will take great patience and time, but it may be the fateful path that Korea needs to take in the 21st century.