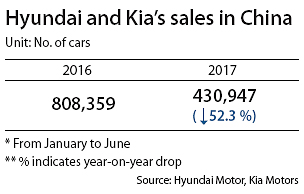 Hyundai Motor’s factories in China resumed operations on Wednesday, a week after they were suspended due to a parts shortage, but the Korean automaker’s fate in the world’s largest auto market continues to remain grim amid weakening trade relations between Beijing and Seoul and competition from cheaper Chinese cars.

Beijing Hyundai Motor, a 50-50 venture between Hyundai Motor and Chinese automaker BAIC Motor, was forced to shut down four plants last week because one of its parts suppliers, the local unit of fuel tank maker Plastic Omnium, refused to source its products, saying it had not been paid approximately 19 billion won ($17 million) as of July 25.

“For now, the four plants in China have resumed operations,” a Hyundai Motor official said Wednesday. “The unpaid money, however, is not resolved yet.”

Beijing Hyundai had barely been able to make cars with the remaining parts it had, and after the inventory ran out, it had to suspend operations, the company said.

Beijing Hyundai operates five factories in China, and the four that were suspended in Beijing and Cangzhou make an average 1.35 million cars a year, more than 80 percent of its entire production in China. The company’s fifth plant in Chongqing has been partially operating and is responsible for 300,000 cars a year.

The plant suspension adds insult to injury in what has been a bad year for Hyundai Motor. The company is struggling with sales in China, affected by poor trade relations between Seoul and Beijing and an unclear brand identity as it tries to compete against cheaper locally-made cars.

Ever since the Seoul government approved the installation of the controversial Terminal High Altitude Area Defense (Thaad) antimissile system, which Beijing believes threatens its security interests, earlier this year, Chinese consumers have been boycotting Korean companies, including Hyundai Motor. The automaker and its affiliate, Kia Motors, saw sales in China drop 52.3 percent during this year’s first half compared to last year, the company said Wednesday. Vehicle sales totaled 430,947, and the same was the case in July, during which the two auto companies sold 70,017 cars, a 37 percent drop from last year.

With such a heavy hit, Hyundai Motor decided to scale back its annual sales goal in China to 800,000 cars this year from 1.25 million. But even that seems hardly attainable at the moment with Hyundai selling just 300,000 vehicles in the first half.

“The fundamental reason behind this latest crisis lies in political and diplomatic conflicts,” Kim Joon-sung, an auto analyst at Mertiz Securities, said referring to Thaad. “This single incident alone will not critically affect Hyundai’s local production or sales, but it shows that there were accumulated conflicts between the carmaker and its suppliers.”

Analysts add that the automaker’s ambivalent brand position in the Chinese market, between high-end and affordable, is also holding back the company’s performance there. A report published Monday by the Woori Finance Research Institute noted that Hyundai Motor had failed to establish a clear brand identity in the market.

“In the past, joint ventures with import carmakers were considered expensive and local brands cheap,” the report said. “But now the barrier has become blurred, so vehicles by joint ventures have to directly compete with highly affordable Chinese cars.”

In such a case, the report said, Hyundai Motor appears to occupy neither the high end nor low end of the market, making the cars unappealing to consumer groups that seek either luxury cars or affordable cars.

The Chinese market is considered a must for automakers, given just 10 percent of its population has cars versus 80 percent in the United States and 40 percent in Korea.

Hyundai Motor has been keen on capturing the market, even establishing a dedicated team early this year to analyze Chinese consumer preferences. The company plans to release four new sport utility models in China by next year, including one China-exclusive model, owing to the popularity of SUVs there.

“Hyundai Motor hasn’t been flexible with local demand, it seems,” said Kim Pil-soo, an automotive professor at Daelim University. “Its SUV launch might be belated.”