‘Liberals started the FTA, so only liberals can end the dispute’

‘Liberals started the FTA, so only liberals can end the dispute’ 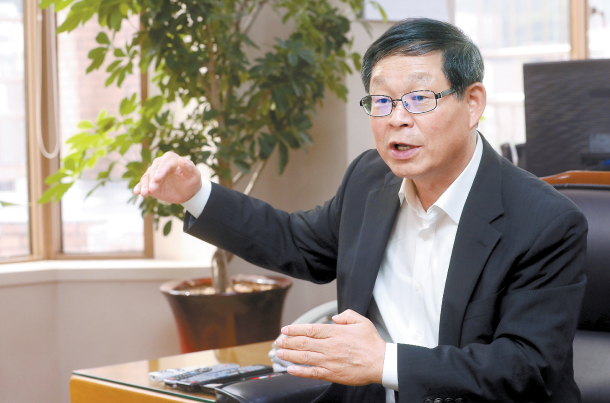 Kim Yong-geun, president of the Korea Automobile Manufacturers Association, which has the country’s five automakers, including Hyundai Motor and Kia Motors in its membership, couldn’t hide his growing concern regarding the future of Korean automakers, saying the “foundations supporting the industry have been shaken.”

Noting a drastic cut in sales in the Chinese market and notoriously hard-line labor unions for Hyundai and Kia groups, Kim, a former career bureaucrat who specialized in industry policy and who now leads the country’s largest automobile interest group, said the labor unions should come to grasp the mounting challenge facing the industry and adapt to the changed environment by forging cooperative relationships with management. “The labor dispute can [only] be solved by a progressive government,” he said, adding, “The government must step in to address the issue.”

What follows is an edited expert of his interview with the JoongAng Ilbo, conducted last Wednesday in his office in Seoul.

Q. How troubled is the Korean auto industry now?

A. Three cornerstones of the industry — exports, domestic consumption and production — have been shaken. Auto production volume by domestic carmakers remained stagnant between 2012 and 2015 at around 4.5 million cars a year. But last year, it was cut by 300,000 to 4.23 million. With a slump in domestic consumption on top of a decrease in auto exports, it is still under-performing. Of the eight countries that manufacture major auto products, such as the U.S., Japan and Germany, Korea is the only country that has seen auto production values decrease two years in a row. The Korean auto industry, which has been steadfastly going forward over the past 50 years, is now at a turning point of retreat.

Car production volumes by second-comer nations such as India, China and Mexico have dramatically increased in recent years. Korea’s auto production volume was already surpassed by India’s last year. Mexico could surpass us this year.

How did this happen?

Wages for workers are too high. Our average wage level for auto production laborers is the world’s highest. The average annual wage of auto workers for the five carmakers (Hyundai, Kia, Renault Samsung Motors, GM Korea and Ssangyong Motor) stood at 92.1 million won ($81,937) last year, up by 83.9 percent compared to 2005. To compare, the average wage for Toyota workers was 91 million won, while Volkswagen’s was 80 million won. Last year, labor costs constitute 12.2 percent of total sales posted by the five carmakers, well above a 10 percent mark that is considered a threshold for normal management index. This high figure is an outcome of years of confrontation between labor unions and management that replays every year during negotiations, in which labor unions always manage to achieve a 3 to 4 percent wage increase, regardless of productivity levels or business outcomes.

It seems it all comes down to the labor-management dispute. Are the labor unions really so powerful in the auto industry?

An imbalance in the negotiating power between labor unions and managements is keeping a healthy bilateral relationship from being forged. In advanced countries, there is a strict rule on strike procedures, and companies are allowed to use substitute labor power in times of strike. Labor union members are barred from seizing production sites, all of which contribute to ensuring a balanced labor union-management relationship. In Korea’s case, labor laws and regulations set up 30 years ago are now giving labor unions the upper-hand in their relationships with management. For Korean auto labor unions, it only requires a simple majority of votes to go into a strike. For Volkswagen, 75 percent must vote “yes,” while General Motors requires two-thirds of its union members to agree. Once labor unions here go on a strike, there is no deadline for its end. But in the case of Volkswagen, its labor union can only exercise its strike right once per time. Also, yearly collective bargaining and short terms for labor union leadership, and competition among different unions to present more radical demands, is blocking the formation of a sound management-labor relationship.

But Toyota only requires a simple majority for labor union members to declare a strike and there is no deadline to end a strike, right?

Yes, that’s true. But in Japan, there is a strong cooperative spirit in the management-labor partnership, which makes labor strikes an extreme rarity. We have to learn from such cooperative partnerships. Korea is like the Galapagos Islands in terms of its isolated, backward management-labor relationship. Germany, Japan and the U.S. all adopted to the changing environment.

I recently met an executive-board member of GM involved in personal management. The official told me there is a deep understanding among labor union members that if the company goes bankrupt, so does the labor union. There have recently been talks about having labor union leaders participate in management decision-making process, as with the German model. It is indeed a good model to learn from. But for Germany’s auto labor unions, there is a deep sense of business responsibility as profound as that held by company managers. They have maintained their position that they are willing to sacrifice their wage increase as long as their employment is secured and cars are produced domestically. Such a system that allows labor unions to take part in the management process is possible thanks to such an understanding. Do Korean automakers’ labor unions share such a sentiment?

Why is the labor dispute so acute in the Korean auto industry?

Because the auto industry requires massive labor work in the production process. It is composed of a huge assembly process and often requires overtime work. It is an industry area where the amount of labor input is in proportion to production output. There has been only a few changes in the management-labor relationship so far because it is much harder to relocate manufacturing lines overseas, as opposed to the electric industry, for instance mobile phones.

There is the sentiment in the auto industry that those in labor unions are trying to take as much as they can before Korean automakers go under.

It appears that improving the labor-management partnership isn’t one of the 100 policy agendas of the Moon Jae-in government.

The former [liberal] Roh Moo-hyun government started the Korea-U.S. free trade agreement, so the dispute can only be ended by a progressive government.