Consensus is the key to Asean, says its secretary general

Consensus is the key to Asean, says its secretary general 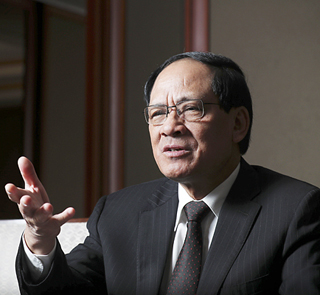 Asean Secretary General Le Luong Minh attributes the success of the 50-year-old Association of Southeast Asian Nations to its ability to achieve unity in the face of challenges and a unique way of making decisions based on joint consensus.

Minh, who previously served as Vietnam’s ambassador to the United Nations, sat for an interview with the JoongAng Ilbo and Korea JoongAng Daily on the sidelines of the International Conference on the Asean-Korea Partnership at the Lotte Hotel in central Seoul Wednesday.

He said that Asean maintains its unity on the basis of shared commitments and collective responsibility for regional peace and prosperity, as well as the principles of respect for national independence and sovereignty and non-interference in the internal affairs of the 10 member states.

Asean had a combined GDP of $2.6 trillion won in 2016 and as a bloc is the sixth largest economy in the world. Total merchandise trade with Korea doubled over the past decade from $61 billion in 2007 to $124 billion last year, with an average growth of 9.2 percent.

This year marks the 50th anniversary of Asean and also the Asean-Korea Cultural Exchange year. “This is a very important occasion for all of us in Asean and Korea to discuss what it means to further deepen relations and cooperation between, I would say, the two most important partners in the Asia-Pacific region,” Minh said.

Following are edited excerpts from the interview.

Q. Asean marked its 50th anniversary this month. Can you share the secrets to its success?

A. When Asean was established in 1967, it had only five member countries. Southeast Asia was a divided region in the Cold War so tensions were deep among member states. Many people did not believe Asean would survive. But Asean survived and prospered. I would say that the first important milestone for us was the inclusion of all Southeast Asian countries in the association. Then in 2003, Asean through the Bali Concord II envisioned a community made on three pillars: the political-security pillar, economic pillar, and social-cultural pillar, so the idea of a community emerged. The birth of the Asean Charter in 2007 gave Asean legal status. The final and most recent important milestone for us was the establishment of the Asean Economic Community in 2015.

Asean is composed of 10 member countries that have different political systems, religions and ideologies. How was it possible for the Asean community to prosper?

The most important factor of Asean over the past 50 years is our ability to unite on the basis of challenges and adversity. And what are those challenges: peace, security, harmony and prosperity for the region. Despite our differences, those challenges united us.

What is the “Asean way?”

The Asean way is that every important decision in Asean is made on the basis of consensus. That is to ensure that no country, no member state, no people, would be left behind in any major decision affecting the shared interest and concerns of all Asean countries. Sometime, this principle may slow the process of making decisions, but in the end, any decision that Asean makes on the basis of consensus will ensure implementation because it is on a voluntary basis.

How do you view the relationship between Korea and Asean?

Since 1989, when Asean and Korea established relations, the relationship has broadened and deepened and now covers all important spheres from political and security cooperation, economic cooperation, to socio-cultural cooperation. Korea is now among the top investors in Asean. Asean, in turn, is among the top partners and investors of Korea. We have an ambitious target to reach $200 billion [in trade] by 2020. The launch of the Asean Cultural House in Busan is a manifestation of our joint resolve to move our partnership to a higher level.

On the nuclear issue on the Korean Peninsula, the position taken by us has been very consistent, and also very strong and clear. We are for the denuclearization of the peninsula, de-escalation of tensions, resumption of talks aimed at resolving the dispute and the tensions and restoring normalcy and stability on the peninsula. Most recently at the Asean foreign ministers’ meeting [in Manila earlier this month], we issued a very strong statement calling for abiding by United Nations Security Council resolutions and pledging that Asean would play a constructive role in contributing to the solution of this issue.