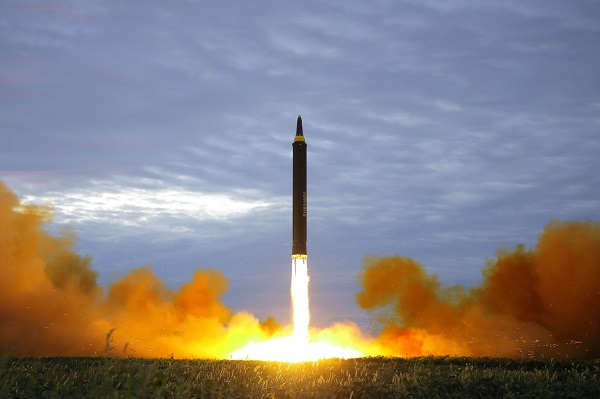 A Hwasong-12 missile is launched at the Pyongyang Sunan International Airport on Tuesday morning, which reached an altitude of 550 kilometers (341 miles) and flew 2,700 kilometers before splashing down in the Pacific to the east of Japan’s northern island of Hokkaido. RODONG SINMUN

North Korea made clear its intention to fire more missiles over Japan, setting the Pacific Ocean “as a target in the future.” It also revealed Wednesday that the missile launched Tuesday was a Hwasong-12, as many experts thought, the same missile Pyongyang threatened to shoot into waters near Guam, home to American military bases.

After a day of silence, the North crowed over Tuesday’s launch and published photos, including its leader Kim Jong-un smiling at the launch site, Pyongyang Sunan International Airport in the capital city.

The state-owned newspaper Rodong Sinmun filled its front and second pages Wednesday with 23 photos related to the test.
The North did not shy away from calling Tuesday launch a warning to the U.S., saying the missile test was a “meaningful prelude to containing Guam,” which it called an “advanced base of invasion” for the U.S.

“Involved in the drill were Hwasong artillery units of the KPA Strategic Force tasked with striking the bases of the U.S. imperialist aggressor forces located in the Pacific operational theater,” said the Korean Central News Agency in an English dispatch. KPA refers to the Korean People’s Army.

On Aug. 9, Pyongyang threatened to launch four missiles into waters only 30-40 kilometers (18.6-24.8 miles) from Guam in an angry response to U.S. President Donald Trump’s threat to confront North Korea with “fire and fury.”

The missile launched at 5:57 a.m. Tuesday reached an altitude of 550 kilometers (341 miles) and flew 2,700 kilometers for 29 minutes before falling into waters to the east of Japan’s northern island of Hokkaido, according to the South Korean military.

In past tests, the North fired missiles at a steep angle to reduce their range, but Tuesday’s missile was launched at a normal angle. In the photos released by the Rodong Sinmun, the missile was erected horizontally on a launching pad. But soon after it reached a certain altitude, it changed its flight path to the normal angle of 30-45 degrees, resulting in a 2,700 kilometer range.

“A missile changes its flight path by having a propellant in a warhead, which sprays gas into the air to adjust the direction once it reaches a certain altitude,” said Kim Kyong-soo, a professor of defense science at Korea National Defense University.”

While the missile fired Tuesday flew 2,700 kilometers, about 600 kilometers short of the distance between North Korea and Guam, analysts say the distance could be increased with more fuel. The Hwasong-12 is estimated to have a range of up to 6,000 kilometers.

Pyongyang claimed the missile “crossed the sky above Oshima peninsula of Hokkaido and Cape Erimo of Japan along the present flight track and accurately hit the preset target waters in the northern Pacific,” without detailing the exact location of the target.

If the North did indeed accurately hit a preset target, it means that its payload withstood searing temperatures when re-entering the atmosphere, a technology that is key to weaponizing intermediate range ballistic missiles (IRBMs) like the Hwasong-12 and intercontinental ballistic missiles (ICBMs). Both require a re-entry vehicle to withstand the intense heat when it reenters the atmosphere from space.

Speculation arose that the missile had multiple warheads after the Japanese media reported that three objects from the missile were spotted falling into the water Tuesday.

But Kim of the KNDU said such a case was unlikely, and the object may have been debris.
“The North has never shown any capability in multi-warhead missile systems,” he said. “Looking back on the North’s progress in missile technology, it takes gradual steps to advance its capabilities. I think the missile failed to re-enter the atmosphere though more data is needed to confirm such a call,” said Kim.

President Moon Jae-in agreed with Japanese Prime Minister Shinzo Abe to “maximize” pressure on the North to force it to negotiations during a phone conversation on Wednesday, the presidential office said. Moon said the North’s firing of a missile that flew over Japan’s main airspace was an “act of violence to the neighboring country.”

The first four tests differed from Tuesday’s launch because the North insisted that the projectiles were rockets for satellite launches. Experts viewed the North’s claim as an excuse to cover its pursuit of missile technology. On Wednesday, the North gave no excuse for the launch.

U.S. President Trump said the Tuesday missile test indicated Pyongyang’s “contempt” for the international community, saying “all options are on the table.”

“The world has received North Korea’s latest message loud and clear: this regime has signaled its contempt for its neighbors, for all members of the United Nations, and for minimum standards of acceptable international behavior,” said Trump in an official statement issued Tuesday Washington time.

“The Security Council stresses that these DPRK actions are not just a threat to the region, but to all United Nations Member States,” reads the statement, using the acronym for the Democratic People’s Republic of Korea, the North’s official name.

While it carried significance that China, which has a track record of opposing bold economic sanctions on the North such as cutting off oil supplies that keep the North’s economy afloat, joined other Security Council members in renouncing the North’s action Tuesday, Beijing reiterated its demand that a U.S.-operated anti-missile system set up in South Korea be withdrawn, saying it would “increase tensions and undermine the security of the region, including China.”

While the UN Security Council sanctions approved on Aug. 6 with the consent of the North’s longtime benefactors China and Russia in response to two ICBM tests in July are the strongest yet, they fell short of mandating Beijing turn off the oil tap for its Communist ally.

Experts agree shutting off oil to the North would do serious damage to the North’s already isolated economy.