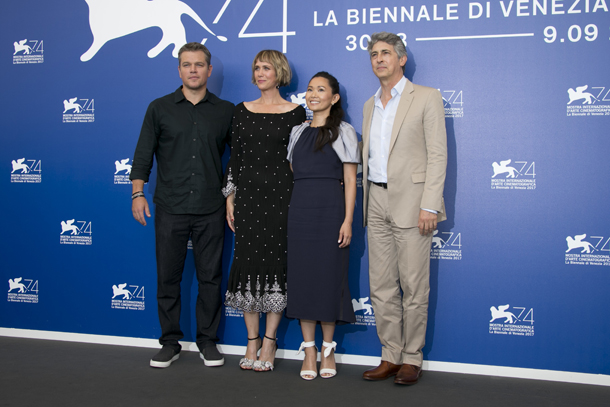 Actors Matt Damon, from left, Kristin Wiig, Hong Chau and director Alexander Payne pose for photographers at the photo call of the film “Downsizing” during the 74th edition of the Venice Film Festival in Venice, Italy, Wednesday. [AP/YONHAP]

VENICE, Italy - “Downsizing” has generated jumbo-sized buzz at the Venice Film Festival - not least as viewers debate how to describe it.

Is it a science fiction film, a romantic comedy, a political parable, an apocalyptic thriller? Alexander Payne’s movie mixes all those elements in its story of a man, played by Matt Damon, who tries to solve his problems by shrinking himself.

Damon and co-stars Kristen Wiig and Hong Chau joined Payne on the red carpet for the film’s Venice premiere Wednesday.

“Downsizing” has ingredients that could help it strike a similar chord with audiences and awards voters: a likable, bankable star in Damon; a strong supporting cast that includes Wiig and Christophe Waltz; and an imaginative story laced with compassion and humor.

Payne says despite its sci-fi premise and international canvas, “Downsizing” is not so different to the films he’s best known for - funny-sad stories of middle-aged or Midwestern strugglers such as “About Schmidt,” “Sideways” and “Nebraska.”

“It has the same sense of humor and basically the same tone,” Payne told reporters in Venice on Wednesday.

The script by Payne and Jim Taylor opens with a Norwegian scientist making a breakthrough he thinks will save humanity: a technique that can shrink people to 5 inches (12 centimeters) tall. That means they use a tiny fraction of the resources they once did - and need to pay less, allowing people of modest means to grow instantly rich by becoming small.

The movie has fun imagining what the miniaturized world would be like, as Damon goes to live in a luxury micro-city, a sort of retirement community for the tiny.

Then it takes a serious turn to ask whether science could be humanity’s salvation, or whether stubbornly fallible human nature is likely to be our species’ undoing.

Along the way, a movie that started in the familiar Payne territory of Omaha, Nebraska, takes viewers all the way to an underground bunker in a Norwegian fjord.