Price of the Northwest Passage

Price of the Northwest Passage 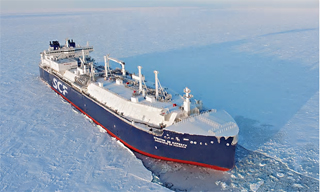 Roald Amundsen, the first person to reach the South Pole, also had a lesser-known role in the exploration of the North Pole. In 1906, he sailed a small fishing boat from Oslo, traveled through Greenland, Canada and the Bering Strait, and reached San Francisco after spending three and a half years in the freezing Arctic Ocean.

In the 18th century, explorers around the world tackled the challenge of sailing the Arctic, but the ice and cold weather frustrated them every time. In 1845, John Franklin, an English rear admiral, led a crew to explore the Northwest Passage but went missing after two months. Before Amundsen’s voyage, it had been considered impossible to sail across the Arctic.

At first, the efforts were made out of the pure thrill of exploration and had no commercial purpose. However, global warming has changed that situation. High temperatures during the summer continue to break records every year in the North Pole, and icebergs are melting at a faster rate. Icebreaker ships from the United States, Russia and Norway have begun to sail through the polar waters.

Around the world, commercial vessels are transporting petroleum and natural gas. It takes about 21,000 kilometers (13,049 miles) to get from Rotterdam in the Netherlands to Asia through the Suez Canal. However, the Northwest Passage would cut that trip to 12,700 kilometers. A 40-day voyage could be reduced by 30 percent, and the risk of being attacked by Somali and Malaysian pirates could be avoided.

On Aug. 24, the Russian tanker Christophe de Margerie, carrying liquefied natural gas, reached Boryeong in South Chungcheong 19 days after leaving Hammerfest in Norway via the Arctic route. It’s not the first time the route has been used to transport something to Korea. Previously in October 2013, Hyundai Glovis leased a Swedish vessel to travel from Ust Luga in Russia to Gwangyang, South Jeolla, in 35 days.

What sets the most recent voyage by the Christophe de Margerie apart is that the vessel sailed on its own without the help of an icebreaker. Icebergs in the Arctic are melting day by day. It is not bad for Korea to be able to access a new route, but we must not forget its price. The Korean Peninsula is getting warmer, and climate change can be spotted all over the world. The future we exchange for the Northwest Passage is not necessarily bright.