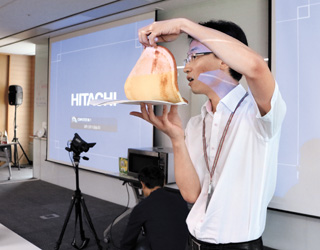 The test of a so-called instant food product is how closely it resembles its original model - home-cooked food that takes time.

And with the rising number of single-person households in Korea, the market for instant food products is growing steadily. So packaging has never mattered more. On Thursday, the company held an event to show the press its packaging technology at its headquarters in central Seoul.

“Using a thermal-graphic camera, we observe if heat in a microwave oven is distributed evenly to the food inside a package,” said Cha Gyu-hwan, manager of the company’s packaging center. “We experiment with microwave ovens from diverse brands to minimize errors.”

The packaging center was established in 1990 to develop instant food packages. It has 26 researchers and the company pumps more than one billion won ($887,100) into research every year. CJ CheilJedang’s preeminent instant food product is microwaveable rice sold under the Hetbahn brand. Hetbahn’s history epitomizes the center’s efforts over the past two decades.

When it was first released in 1996, the product was released in square packaging, a nod to the bento culture of Japan. The company soon realized that Koreans were used to having circular plates on their tables so it re-launched the product. In order to prolong its expiration date, it used four layers of film on the lids. The two outer layers are made of nylon to minimize damage from outside. The third layer is laminated with ethylene vinyl alcohol which prevents oxygen from getting in. The innermost layer is designed to allow the customer to peel the whole top off easily after cooking.

CJ CheilJedang said it is launching an advanced susceptor, a material used in packaging for microwaved foods, to enable crisper, almost grilled-like textures on microwaved pizza or dumplings.

“It is true that America has advanced technology in terms of packaging instant food products,” the center manager said. “But Korea is catching up and we look forward to launching a similar susceptor material.”