Eyes are on whether the new phone will be a game-changer for Korea’s second largest electronics company, which has been struggling in the mobile communications business.

In an aggressive bet to win over customers, especially those that frequently use their smartphones as a medium for multimedia, the company included a number of industry firsts to the new gadget including the F1.6 aperture camera lens and an upgraded sound system in collaboration with high-end audio device maker Bang & Olufsen.

The phone will also debut the Korean version of Google Assistant. 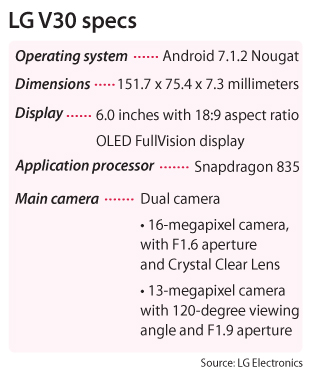 “I am confident LG’s V30 is the most perfect smartphone we have ever designed and will be desired by consumers,” said Juno Cho, president of LG’s mobile communications business unit in an opening address at the event on Thursday.

One of the key features of the new phone is the upgraded dual camera.

The main camera on the rear of the V30 features an F1.6 aperture, an upgrade from the F1.8 lens on the previous V20 phone. A lower aperture indicates that a camera is capable of gathering more light leading to more vivid photos and videos.

The Korean tech giant also paired the lens with a so-called “Crystal Clear Lens” made out of glass rather than plastic. According to LG, the glass-based material, usually applied to high-end DSLR cameras, allows the V30 to capture objects in more detail thanks to its higher light penetration rate.

All the hardware upgrades are supported by the phone’s cinematic video mode, which offers 15 color filters as well as a “point zoom function” that allows users to zoom in on desired “points” of the video while filming.

“We are literally on the verge of transitioning from storytelling to story showing,” Cho said. “With V30, ordinary users can now make professional cinematic videos.”

The phone comes with a 6-inch display, 0.3 inch larger than its predecessor. It has an 18:9 aspect ratio, but the actual dimensions of the phone have become smaller by 3 millimeters in width and 8 millimeters in length. The phone weighs 158 grams (5.6 ounces), much lighter than the recently released Galaxy Note8 phablet from Samsung Electronics, which weighs 195 grams.

According to LG, the V30 is the lightest smartphone in the 6-inch and over category. A thinner organic light emitting diode (OLED) display and smaller components enabled the change, according to Andrew Coughlin, business leader of the mobile communications division at LG for the U.K. and Northern Europe.

The V30 is the first LG phone with an OLED Fullvision display, which offers a faster response time with minimal afterimages when viewing an action-packed movie or playing games with a fast refresh rate.

LG also equipped the V30 with Hi-Fi Quad DAC speakers with audio tuning by engineers from Bang & Olufsen PLAY. A set of earphones from the luxury brand are included with the device. Quad DAC, which refers to a chip consisting of four digital-to-analog converters, helps produce quality sound without background noise.

One of the most highly anticipated features of the new phone, especially for the domestic audience, is the Korean version of Google Assistant. The voice-powered assistant includes functions specific to the phone, according to LG.

In the long term, LG and Google plan to collaborate on smart home services controlled by the smartphone. LG is creating an ecosystem among its Wi-Fi connected home appliances so consumers can control devices via voice control through Google.

The V30 is expected to roll out in the Korean market with a price tag between 900,000 won ($798) and 1 million won. Industry experts expect the phone will be about 100,000 won cheaper than the Galaxy Note8. The new Samsung phone, though heavier and pricier, comes with a higher RAM capacity, 6 gigabytes, which offers better multitasking capabilities.

“In our view, the survival of the mobile communications business is at stake [and] the division looks likely to make another operating loss this year,” said Park Won-jae, a research fellow at Mirae Asset Daewoo in an analysis report Wednesday.

“In the medium and long term, the company needs to hold onto its smartphone business as an increasing number of products in IoT and automotive electronics are connected to smartphones.”