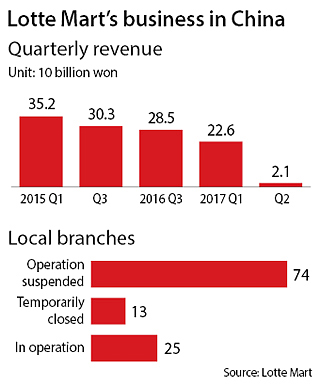 Lotte Mart will inject an additional 340 billion won ($301.6 million) into its Chinese operation in a continued effort to combat the fallout from the deployment of the Terminal High Altitude Area Defense antimissile system.

Some 70 percent of the new fund, or 240 billion won, will be spent on paying back its short-term debt and the remaining 100 billion won will be used to operate the Chinese Lotte Mart branches.

Lotte Mart already injected 360 billion won back in March, in an attempt to continue operating amid fallout derived from geopolitical tensions between Seoul and Beijing.

Between March and May Chinese authorities raided Lotte Mart branches and shut them down, claiming a violation of fire regulations. Local consumers boycotted Lotte Mart as sentiment towards Korea worsened.

From March to August, the Chinese operation endured a loss of 500 billion won despite the addition of the original fund. Industry experts estimate losses will surpass 1 trillion won by the end of this year.

Lotte Mart has 112 branches in China, 74 of which have been suspended for regulation violations. An additional 13 have been closed by Lotte Mart because of either poor performance or consumer boycotting.

At the moment, only 25 of them are in normal operation.

While the suspended branches have not been making money for the past six months, Lotte Mart has still been paying rent and employee wages.

Based on local policy, Lotte Mart has been paying 70 to 80 percent of wages for employees that worked at branches that are currently shut down. The discount chain operator said sales at the 25 branches operating normally have dropped to 70 to 80 percent as well.

Despite such dismal results, Lotte Mart is maintaining its stance that it will not pull out from the Chinese market.

“We are going to endure at least until the first half of next year,” an official from Lotte said. If there is no recovery until then, Lotte Mart would have to eventually pull out or reshuffle its local operation such as minimizing the workforce or closing down more stores.

“There is no detailed plan yet, but we might consider adjusting the business portfolio, selling assets, or restructuring,” the official said. Completely withdrawing from the Chinese market, however, is not in the hands of Lotte’s Seoul headquarters because Lotte Mart’s Chinese branches are handled by Lotte Shopping Holdings in Hong Kong, the company explained.

Industry insiders speculate that the withdrawal of Lotte Mart from the Chinese market would jeopardize other projects Lotte is pushing in the neighboring country. There are currently some 20 affiliates operating in China at the moment, and Lotte Mart’s pullout could affect their business as well.

Emart, another discount chain in Korea, announced its complete withdrawal from China in May after doing business there for the past 20 years. It opened its first Chinese branch in 1997 and expanded the number to 30.