Inside the aging mind of a former serial killer

Inside the aging mind of a former serial killer 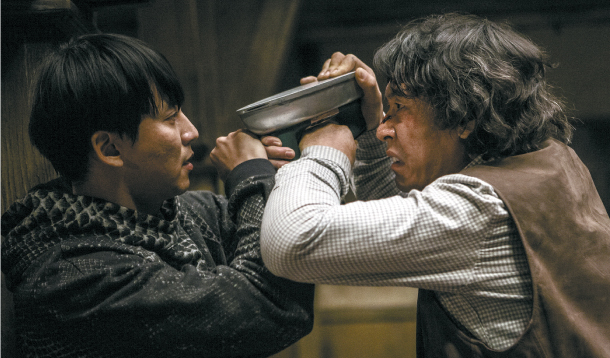 “Memoir of a Murderer,” starring Kim Nam-gil, left, and Seol Kyung-gu, is a crime thriller slated for release on Wednesday. [SHOWBOX]

In the summer of 2013, novelist Kim Young-ah’s crime thriller “Diary of a Murderer” was the hottest book in the country and quickly flew off bookshelves, becoming a best seller. Four years later, the story is coming to the big screen with a star-studded cast which includes Seol Kyung-gu, Kim Nam-gil and Seol Hyun of female act AOA.

Directed by “Seven Days” (2007) filmmaker Won Shin-yeon, the movie "Memoir of a Murderer," revolves around a retired serial killer Byeong-su (Seol) who suffers Alzheimer’s, and his efforts to save his daughter Eun-hui (Seol Hyun) from a young policeman Tae-ju (Kim). Byeong-su thinks that Tae-ju is the one behind the serial murders of young women that has shaken the town, and tries to separate him from Eun-hui.

With his limited memory, Byeong-su attempts to prove the policeman guilty to save his daughter from becoming the next victim, only to be ridiculed by others.

The movie continuously wrestles with who the actual culprit behind the serial killings is.

“I wanted to make a film that is very close but distant from the novel at the same time,” said the director.

He explained that he tried to follow the basic format of the novel like its style of writing and the depiction of Byeong-su’s diary during the creation of the film.

In regards to the tone of the movie, the director said, “I tried to give the movie a classy feeling using visual art, lighting and [creative] shots. Not using lighting to highlight characters was another way to make the movie look classic.”